A visual tour of the Syrian crisis

Take a look at images of the 5 year long crisis that began with the Syrian Civil War. 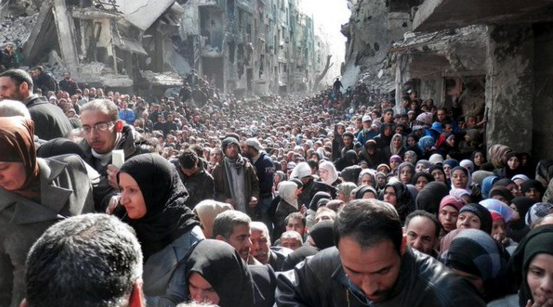 March 15, 2016 marks the fifth anniversary of the Syrian Civil War. In 2011, peaceful demonstrations against the regime in Syria quickly escaleted into a violent government crackdown and civil war. The war in Syria has killed hundreds of thousands of civilians, bombings have left cities in ruins, and basic needs like food and health care have become hard to access.

As a result of the conflict in Syria, the world is facing the worst refugee crisis since World War II. Since 2011, the conflict has displaced almost 12 million people, or half the Syrian population, including the 6.6 million displaced inside Syria.

Here are 23 images that show the impact the war has had on Syria and the millions of people who have been displaced by the conflict.

"A fervent desire to live." The revolutionary dances at the start of the Syrian civil war 📻 https://t.co/3mhhjzhPnHpic.twitter.com/7x8mmflC8k

Aleppo, Syria, 2012: "This Free Syrian Army fighter was shooting at the Syrian army and then started to receive rea… pic.twitter.com/ON8WAlxlWW

The Syrian Maelstrom—Taking a deeper look at Syrian Civil War’s participants other than ISIS|https://t.co/DPI1SAKVdspic.twitter.com/rz9JHxWzxj

Aleppo, Syria. Prior to Syrian Civil War, it was a economic and cultural capital of Syria. Today, it lies in ruins. pic.twitter.com/OXmSJN9yx3

Death toll in Syrian civil war is 470,000: The Guardian https://t.co/F9PNnb0dljpic.twitter.com/lTfSlqlgPU

"Numbers that sum up Syrian civil war: the place where life expectancy has fallen 20 years" https://t.co/HqRq4FZg1vpic.twitter.com/6JqQYpPOQG

No, this isn't a city. It's Zaatari refugee camp in #Jordan housing over 80,000 Syrians. More than half are children pic.twitter.com/D2zBthqdtq

#Migrants arrive by Turkish smuggler boat to #Lesbos island #Greece. The boat owner delivered some 150 persons to the Greek coast in front of German frontex policemen and tried to escape back to Turkey, he was arrested later in Turkish waters. #nytassignment @nytimes

No it's not #Glastonbury, it's a #refugee camp in #Greece, #EU. Staggering photo on Macedonian border @MailOnlinepic.twitter.com/kkH8EtkEim

Very honored to receive the Swedish picture of the year award for my image of Lamar. It is a part of my story "where the children sleep" Lamar, 5 years old Horgos, Serbia. Back home in Baghdad, the dolls, the toy train, and the ball are left; Lamar often talks about these items when home is mentioned. The bomb changed everything. The family was on its way to buy food when it was dropped close to their house. It was not possible to live there anymore, says Lamar’s grandmother, Sara. After two attempts to cross the sea from Turkey in a small, rubber boat, they succeeded in coming here to Hungary’s closed border. Now Lamar sleeps on a blanket in the forest, scared, frozen, and sad.

#PhotoOfTheDay: 'Hope for a New Life' by Warren Richardson #refugeeswelcome#Hungary#Serbiahttps://t.co/sgJ69Pk3hEpic.twitter.com/B659vZuYYO

Man and wife with tiny baby throw themselves onto track demanding not to be taken to camps. Getting c distressing pic.twitter.com/ploEd11rAH

Maram, 13, a refugee from Daraa, Syria is taking the train with her family from Presevo, Serbia to the Croatian border where they will continue on to Germany. "The people in Greece were so nice to us, but the journey has been very exhausting, and the boats were very scary. The people here are so nice. And the police are very nice-they saw some kids who were cold and they brought them jackets. Now we are going to Germany, and we will study and learn the language. And we will stay there and hope for a happy life." Photo: Sumaya Agha for Mercy Corps

A heartwarming Sunday for Hala, her husband Mohammed and their children. They've just reunited with their relatives, on...

Thank you to this midnight crew for welcoming our newly arrived #refugee family!! #volunteer #RefugeeResettlement #refugeeswelcome

These images provide small snapshots of the devastating and complicated crisis that is taking place in Syria. The more people know about the crisis, the more we can do together to support those who are most in need. While many factors have contributed to the scale and size of the current Syrian crisis, one fact is simple: millions of refugees and displaced Syrians need our help.