The power of crowdfunding enables a refugee to lift himself and his family out of poverty. 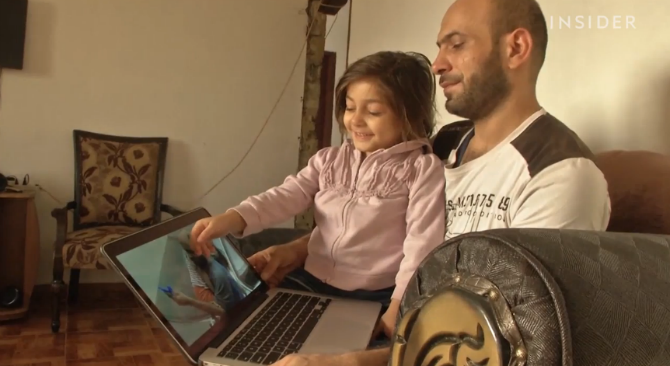 Abdul Halim al-Attar, a 33-year old Syrian refugee living in Lebanon, inspired an internet campaign after an image of him selling pens on the streets of Beirut while carrying his sleeping daughter went viral. Today, he is an entrepreneurial success story.

Syrian father selling pens in the streets of #Beirut with his sleeping daughter #Lebanon#Syriapic.twitter.com/KOz4mjW1rd

The story of the single father of two struggling to get by ignited a successful #BuyPen campaign on Indiegogo that raised over $191,000 USD.

Business Insider recently did a profile on al-Attar to check in on how he is doing.

So far, al-Attar has only received 40% of the donations, but he’s been able to do so much with what he’s been given.

According to the profile piece, he has moved his family from the one bedroom they shared to a more spacious two-bedroom apartment and owns a kebab shop, restaurant, and two bakeries, where he employs 16 other refugees. His children also go to school now.

"Not only did my life change, but also the lives of my children and the lives of Syrian people whom I helped," al-Attar told the Associated Press.

Stories of poverty and hardship are not uncommon for the millions of refugees around the world, particularly for the wave of refugees fleeing Syria.

In Lebanon alone there are 1.3 million registered Syrian refugees and most of them struggle to find work.

Not everyone’s story becomes viral but the success of the #BuyPens campaign shows the power of empathy to fuel an individual to change their own fortunes and improve their community.  The goal for the world is to give everyone the opportunities al-Attar has had, so that refugees can rebuild their lives and create thriving communities.