Esha Chhabra is a journalist who covers social enterprise, technology for social impact, and development. This article was written in support of TakePart and Global Citizen.

Though there are more cell phones than toilets in the world, many eye care health workers are still slogging away filling out patient details on paper forms, taking days to transfer files, and not having time to follow up with patients after surgery. One nonprofit has come up with a solution.

HelpMeSee, a New York–based nonprofit, has launched a mobile health, or mHealth, smartphone application that the organization says can revolutionize eye care in the developing world. According to the World Health Organization, cataracts are the leading cause of blindness in developing countries, and 80 percent of all visual impairment can be prevented or cured.

Health workers conducting community outreach to connect people suffering from cataract blindness with clinics that can perform surgery fill out paperwork and manually transfer a patient’s file to a health clinic, which can take up to two days. The new app will help the workers send cataract images and patient data to a health clinic almost instantly. The cloud-based system can operate without Internet connection by storing data and then syncing it when a signal is available.

Once the health workers upload the data, they log the patient’s location into Google Maps. The nearest hospital or clinic receives that data and enrolls the patient for surgery.

“There are other mHealth apps and eye care apps that have been developed, but none of the others integrate into such a comprehensive solution,” says Stefany Marranzini, global campaign operations manager for HelpMeSee.

More than just GPS coordinates, she explains, the app also gives altitude measurements that help local staff figure out how long it will take for a patient to reach a clinic in a certain terrain.

As soon as the patient reaches the clinic, his or her file can be accessed easily, Marranzini says, because the health worker gives each person a record number. Once the patient is treated or has gone through surgery, those results are recorded and uploaded, completing the file. Four weeks later, a community health worker can visit the patient for a follow-up appointment, using the GPS coordinates to find his or her home.

The HelpMeSee app was designed over the course of a year and a half with the help of tech firm Clarity in Calgary, Alberta. To test the app, the nonprofit ran a pilot in India with 15 health workers. Working in partnership with a hospital in Chitrakoot, a town of about 20,000, HelpMeSee has been running eye care camps there for the past three years and has completed almost 100,000 eye surgeries. 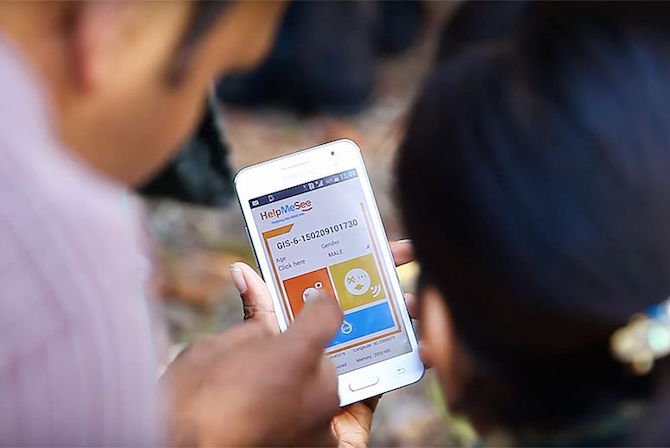 Unlike hospitals that have smaller outreach programs, Marranzini says, the Chitrakoot hospital has 50 employees focused on hard-to-reach areas. Because of the vast distances covered in Madhya Pradesh, the state that houses Chitrakoot, it can take days to process paperwork manually.

The app is a success, Marranzini says. “The health workers were impressed that so much time and resources are saved by using the application.”

While HelpMeSee’s app sounds like a success story for mHealth, a few questions remain. The app requires a smartphone, which many community health workers do not have. HelpMeSee, Marranzini says, is trying to build partnerships with local organizations that will provide phones. If that’s not feasible, it will front the costs itself.

The app is also only available in English, but HelpMeSee is confident that it is user-friendly. “Most of the app is geographically based so it can be used by somebody who is illiterate, if necessary,” says Marranzini.

Given that the 15 health workers in Chitrakoot were able to pick it up so quickly, she’s hopeful that others will as well. “Icons allow them to select whether a patient is blind and other essential details,” she says.

HelpMeSee views itself as an aid to existing health programs in countries.

“We will provide the software, training, and geographic coverage plans necessary for community health workers to complete screening,” she says. But there has to be some existing health infrastructure and manpower for treatment to be provided.

With more than 20 million people worldwide affected by blindness, Marranzini sees the app as a stepping-stone to reaching the most remote patients who’ve been neglected by their health systems.