An exotic spice found in Spanish paella and could help rebuild a country damaged by war and terror.

This article was written by Yolanda Martinez, a TakePart contributor and was first published on TakePart World here.

In Wardak province in Afghanistan, two hours west of Kabul, U.S. Army veteran and entrepreneur Kim Jung chatted and drank tea with Haji Yosef, a local farmer, in the summer of 2014.

With her experience helping search for the land mines that dot the country behind her, Jung was interested in something Yosef had grown.

In his hands he held a clear plastic canister filled with the delicate dark-red strands of one of the most expensive spices in the world: saffron. Depending on the quality, a gram of saffron can sell for up to $25, making it worth more than gold by weight. Yosef had a warehouse full of saffron but couldn't find a buyer outside Afghanistan—he'd even tried to make an online video to market it.

Yosef opened the container and had Jung smell the spice. As the grassy, hay-like smell filled the air, Yosef and Jung started to negotiate. After a few days of haggling, they agreed on a price, and Yosef’s saffron became the first product that Jung sold through her company, Rumi Spice.

Jung started Rumi Spice that fall with four other veterans of the war in Afghanistan. The company became a way for the veterans to do something tangible to help the Afghan people—who live in one of the poorest countries in the world and have struggled to rebuild in the midst of a decade of war.

In the Panjshir valley of Afghanistan servicemen and farmers view a field planted with saffron.
Image: Flickr: Resolute Support Media

Jung came up with the idea of a fair-trade saffron business after talking to Keith Alaniz, an Army friend who served in Wardak, where he met Yosef. Alaniz told Jung about the warehouse full of saffron, and Jung was intrigued by the supply. The business came to fruition while Jung was getting her MBA at Harvard Business School with cofounder Emily Miller.

“Our house was a shipping and receiving warehouse for most of the year,” said Jung, who pitched her saffron to farmers markets and shops in the Boston area, eventually getting Rumi Spice saffron into area restaurants. Rumi Spice also sells the products, ranging from 0.5 grams of saffron to tea sets, online.

Starting with 11 business partners in the country, Rumi Spice now boasts 34 Afghan suppliers. The product provides farmers with a stable income at a time when many farmers rely on the help of international aid organizations to subsist. In a country where 85 percent of the population is involved in agriculture, a business like Rumi Spice gives farmers an immediate boost.

“If you want to empower a country like that, you have to start at the farm,” said Miller, who served in the Army as a Cultural Support Team member. “A cash crop like saffron is the way to go.”

With Rumi Spice, Jung was able to give Afghan farmers a stable income, providing an alternative to the lucrative opium poppy trade—which has helped finance terror in the region.

The United Nations Office on Drugs and Crime reported earlier this month that after a six-year uptick, opium poppy cultivation fell nearly 20 percent in 2015—a dip that officials hailed as a hard-won achievement.

After the war started, irrigation systems and dams were bombed, destroying the water channels that allowed farmers to grow wheat, rice, and vegetables. Orchards were ruined, and farmers turned to poppies and the opium trade to earn a living.

“Farmers have been affected by this because their lands became barren,” said Abdul Reheem Yaseer, an associate director at the Center for Afghanistan Studies at the University of Nebraska–Omaha.

Poppy does not require much water and has withstood the long drought that affected the country. The Taliban took advantage of the situation by paying farmers upfront, using poppy to finance its organization. Farming saffron requires a bit more water and is labor-intensive. But farming the high-value crop has proved to be a smart business decision; some of Rumi Spice’s suppliers had an income of $500 a year before being approached by the company. Now they can expect to earn about $2,000 per kilo. 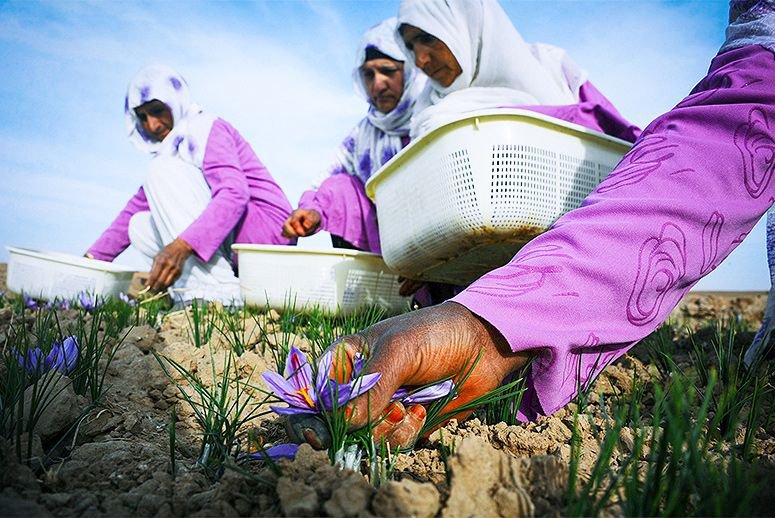 The high price of saffron stems from the intensive hours of labor required to harvest the spice. Each delicate purple flower offers three dark-red strands of spice, or stigmas. Harvesters need to handpick 150,000 blossoms to get the 450,000 stigmas necessary to produce a kilogram of saffron. It is tiring, careful work that falls mostly on women, who make up 80 percent of Rumi Spice’s workforce.

"The market is limited,” said Yaseer, and aside from obstacles put in place by the Taliban, Afghan farmers have other roadblocks. Unlike in Iran, Afghan farmers don't have machines to process the spice or a reliable transportation system to help trade. Rumi Spice is trying to change that.

The company plans to reinvest 10 percent of its profits to fund infrastructure such as machinery and processing facilities in Herat province. But for Afghanistan to become an agricultural competitor and give farmers an alternative to poppy cultivation, irrigation systems and dams also need to be rebuilt, said Yaseer.

“Afghans by nature have been farmers for centuries,” he said. “Nothing will replace the agricultural income.”

The plan for Jung and her business partners is to continue growing Rumi Spice, expanding it to sell other Afghan products. Jung continues to travel to Afghanistan to be introduced to other farmers, who find out about Rumi Spice through word of mouth.

On its website Rumi Spice also shares recipes buyers can create in their kitchen. Americans have seen the spice used in Persian yellow rice dishes and paella. It also shows up in dessert recipes and teas.