A Google Maps perspective of a refugee's journey to safety

Imagine journeying 1,400 miles to the Serbia-Hungary border in search of a safe refugee camp.

The refugee crisis in Europe is nothing short of heart-breaking.

Humans of New York’s recent feature of many refugees and their stories has gone viral and brought to light the inhuman reality many are facing as they seek to flee their countries to safety, while government leaders scurry to figure out how to best and most effectively accommodate such a large influx of persons.

While many people have reached Europe by sea, many have made an unbelievable journey of more than 1,400 miles to get to Serbia’s border with Hungary in their search for sanctuary.

That journey would take 452 hours — about 50 days — if they walked eight hours per day and were able to cover an ambitious 25 miles per day.

To put that in perspective for you, here are five nearly equally distant walking journeys in places you might recognize. 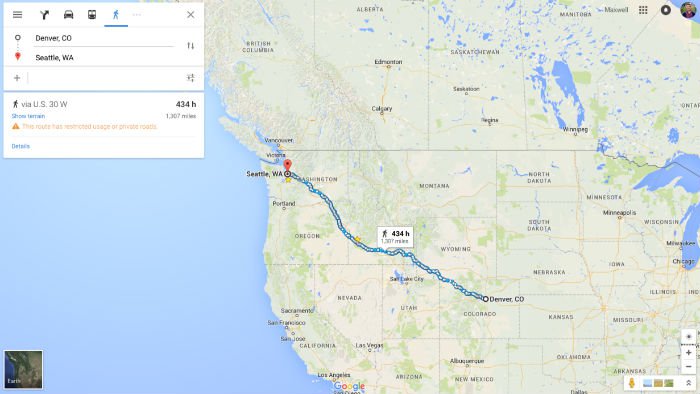 This stroll through the mountains falls a little short of the distance from Aleppo to the Serbian border.
Image: Google

5. A round trip journey through most of Germany

You could hit many of Germany’s major cities, stopover in Switzerland and still fall short of the distance many refugee families are walking.
Image: Google

World Vision’s Chris Huber reports that Hungary recently closed its border with Serbia, forcing refugees and migrants to seek entry into Europe through Croatia, which is now considering closing its borders with Serbia, fearing they will be overcome with refugees. Thousands of people have congregated in the Horgos area on the Serbia-Hungary border. Some families are sleeping in tents, others out in the open, according to Huber.

World Vision has been distributing relief packs to weary refugees, which include bottled water, bananas, sanitary wipes, honey packets, and dates. For families with infants, World Vision has provided baby food and diapers. You can become a World Vision Refugee Responder by visiting here to help us continue distributing these emergency survival supplies to families in need. If you’re outside the USA, donate here.

This article was adapted from this article, written by Chris Huber of World Vision.