A cycle of polio, poverty and disability

How one girl broke the cycle and others can do the same.

When I hear talk around the disease of polio, the first image that comes to my mind, before any mainstream images of immunisation campaigns, is my grandmother. Why? 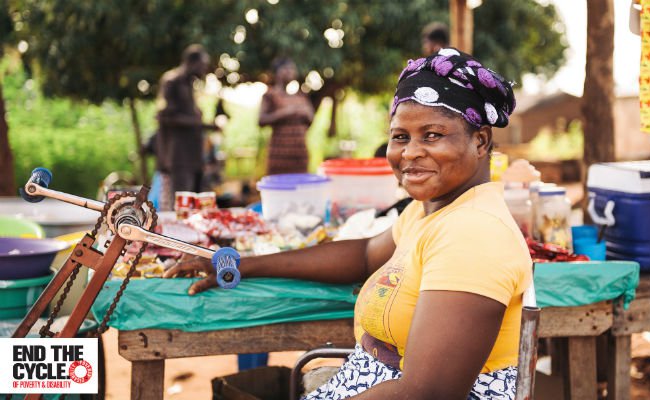 My grandmother, like so many others in her generation had polio. It was 1951 and she had just given birth to her second child when she contracted the disease. Luckily for my grandmother, she was able to access medical treatment immediately and escaped with just one leg slightly weaker than the other.

But for many millions of polio survivors, that is not the case. Polio invades the nervous system and can cause total paralysis in a matter of hours.

As many as one in 200 polio survivors has irreversible paralysis – most commonly of the legs – leaving them with a lasting legacy of permanent disability, and opening them up to a potential lifetime of exclusion, discrimination and poverty.

Globally, over one billion, or one in seven people, experience disability; but most staggering is that 80 per cent of these people live in developing countries.

People living with disability, including survivors of polio, are more likely to live in poverty.

Disability contributes to, and deepens poverty, as a person with disability is less likely to have access to rehabilitation, healthcare, education, and employment opportunities.

However, the cycle of poverty and disability goes much deeper than that.

Poverty can cause disability through many factors, such as inadequate nutrition, access to clean water and sanitation, and unsafe working conditions.

Most notably in the context of polio, poverty leads to disability through a lack of access to healthcare, including preventative healthcare, such as immunisations.

In 1988, when the Global Polio Eradication Initiative began, polio paralysed more than 1000 children worldwide every day.

Abena, from Ghana, was one of those children. She was nine when polio attacked her and left her paralysed.

Determined to go to school, Abena, without access to a wheelchair, would crawl.

Eventually, the physical and attitudinal barriers so often faced by people with disability, became too burdensome and she stopped her education – continuing to deepen the cycle of poverty and disability for Abena.

Fortunately, Abena did eventually receive the rehabilitation and wheelchair she needed, and broke out of the cycle.

She is now the Disabled Women’s Organiser and empowers other women with disability to uphold their human rights, challenge the barriers they face, and reach their full potential.

Thanks to the Global Polio Eradication Initiative, more than 2.5 billion children have been immunised, and the World Health Organisation (WHO) estimates more than 10 million people today are walking who would otherwise have been paralysed.

That’s potentially 10 million more people who will never have to experience the cycle of poverty and disability, and will never know the discrimination and exclusion faced by those living with disability.

Polio may seem like a distant memory for my grandmother, and others living in Australia where it has been eradicated for almost 40 years, but polio remains endemic in Afghanistan, Pakistan and Nigeria where conflict, misconceptions, and political instability, amongst many other factors, challenge the eradication of the disease.

As WHO states, “As long as a single child remains infected, children in all countries are at risk of contracting polio. Failure to eradicate polio from these last remaining strongholds could result in as many as 200,000 new cases every year, within 10 years.”

That means children all across the world, just like nine-year-old Abena, are in danger of contracting polio and are at risk of preventable disability.

Achieving the ambitious goal of eradicating polio, where all children can live in a polio-free world, can bring us one step closer to ending the cycle of poverty and disability.

This article is contributed by End the Cycle, an initiative of CBM Australia (http://www.endthecycle.org.au/).