From children cooling off in sweltering heat to calls for justice, these images are striking.

Why Global Citizens Should Care
These images show a continued need to fight against climate change and inequality around the world. From record-breaking temperatures around the world to protests against discrimination and violence, these photos show why it's more important now than ever to commit to being the generation to achieve the Global Goals and end poverty. Take action here.

Summer is only half way through, yet 2018 is already on track to be the fourth hottest year on record. From California to Greece to Japan, people around the world battled sweltering heat and deadly wildfires this week. Dozens of people have died of heat-related causes in the past few months, but the heat shows no signs of letting up.

Take Action: Take 3 Pieces of Rubbish With You When You Leave the Beach

Scientists say temperatures have been exacerbated by climate change, which is predicted to displace more than 140 million people by 2050, but a historically high number of people have already been displaced by climate change and conflict. The world is still grappling with a global migration and the refugee crisis, the impacts of which were seen clearly this week. People continued to attempt the dangerous crossing from North Africa to Europe in search of better opportunities, while the Trump administration scrambled to reunite migrant families separated at the US-Mexico border before its deadline.

The US goverment ultimately missed this deadline, leading to protests over the family separation policy on Thursday, but this was far from the only protest that took place this week.

Dozens gathered at the MacArthur BART station in Oakland, Calif., to honor the life of 18-year-old Nia Wilson who was murdered at the train station on July 22. The vigil turned into a demonstration as attendees called for justice for Nia, whose murder many believe was racially motivated. Though police are still investigating the motive behind the fatal attack, Nia's death has renewed the public conversation about racial discrimination and violence in the US.

In Brazil, people also took to the streets in protest of violent against black people and racial discrimination on the anniversary of the "Candelaria Massacre" of eight young black Brazilians by police officers. And in nearby Argentina, women donned the iconic red cloak costumes of characters from the "Handmaid's Tale" to call access to reproductive health care and rights.

These are some of this week's most powerful images of protest and resilience.

1) Greece Fires: An aerial view shows a burnt area following a wildfire in the village of Mati, near Athens, on July 26. Greece was counting the cost on July 26 of its deadliest wildfires in living memory, as emergency crews searched incinerated homes and vehicles for the missing after at least 81 people were confirmed to have died. 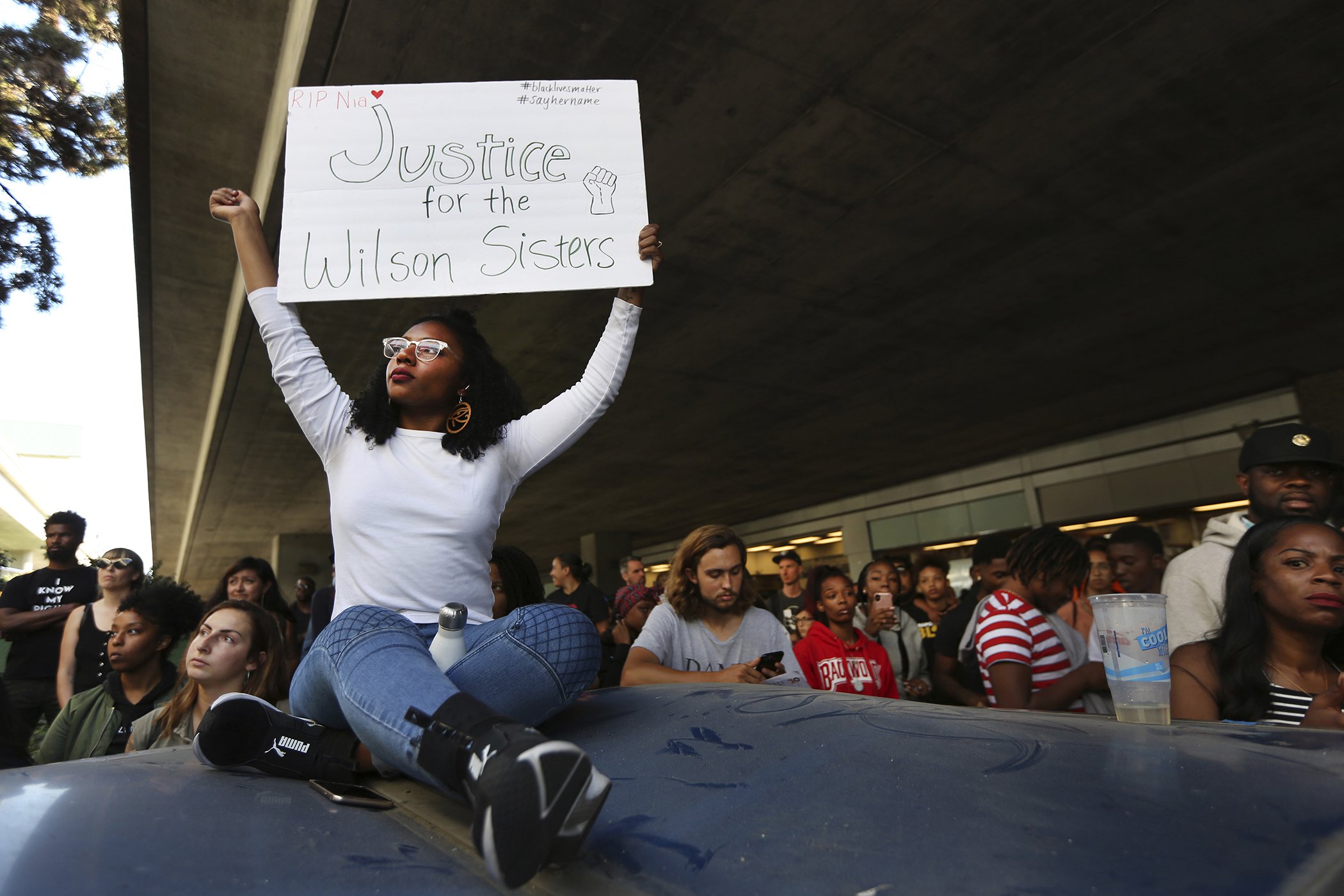 2) Nia Wilson: Jasmine Malone, 23, holds a sign at a vigil held for 18-year-old Nia Wilson who was stabbed to death the night before at MacArthur BART station in Oakland, Calif., July 23. Wilson, 18, and her sister, Lahtifa, 26, were changing trains at a BART station when they were approached by a man and suddenly attacked. Nia was killed at the scene.

3) Immigration in the US: A woman, identified only as Heydi and her daughter Mishel, 6, and a man, identified only as Luis, and his daughter, Selena, 6, relax together in an Annunciation House facility after they were reunited with their children on July 26 in El Paso, Texas. Heydi originally from Guatemala and Luis originally from El Salvador were reunited at an I.C.E processing center about two months after they were separated when they tried to cross into the United States. This week marked a court-ordered deadline for the U.S. government to reunite as many as 2,551 migrant children ages 5 to 17 that had been separated from their families. 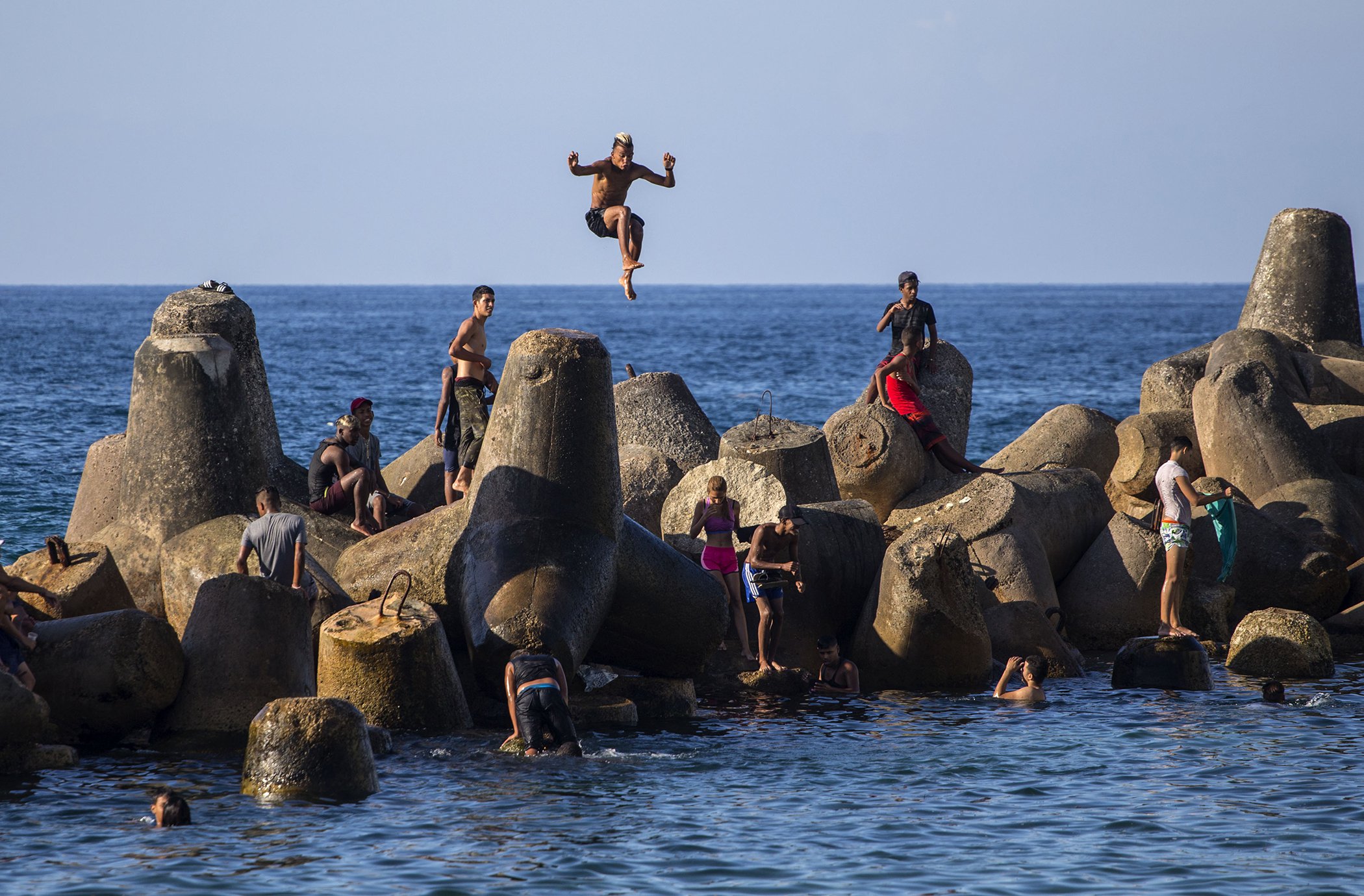 4) Daily Life in Cuba: A youth jumps into the ocean from concrete wave breakers in Havana, Cuba, July 22. 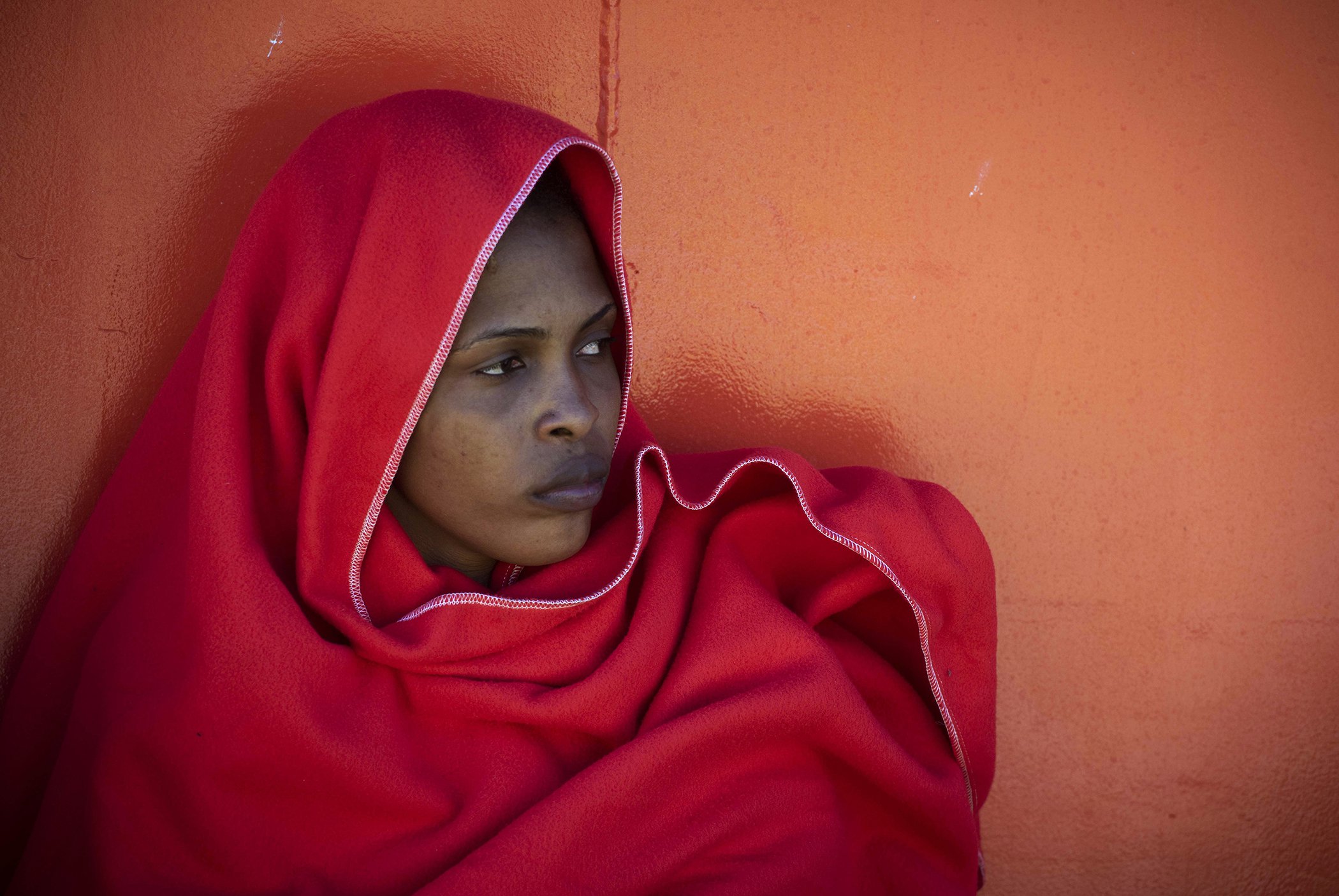 5) Migrant Crisis: A migrant arrives after being rescued by Spain's Maritime Rescue Service in the Strait of Gibraltar, at the port of Algeciras, southern Spain, July 25. Spain's Maritime Rescue Service says that nearly 900 people have been rescued from waters south of the Iberian Peninsula over the past two days, as an increase in arrivals increases pressure on the country's infrastructure to deal with migration.

6) Wildfires in California: An air tanker drops retardant while battling the Ferguson fire in the Stanislaus National Forest near Yosemite National Park, California on July 21. A fire that claimed the life of one firefighter and injured two others near California's Yosemite national park has almost doubled in size in three days, authorities said Friday. The US Department of Agriculture (USDA) said the so-called Ferguson fire had spread to an area of 22,892 acres (92.6 square kilometers), and is so far only 7 percent contained. 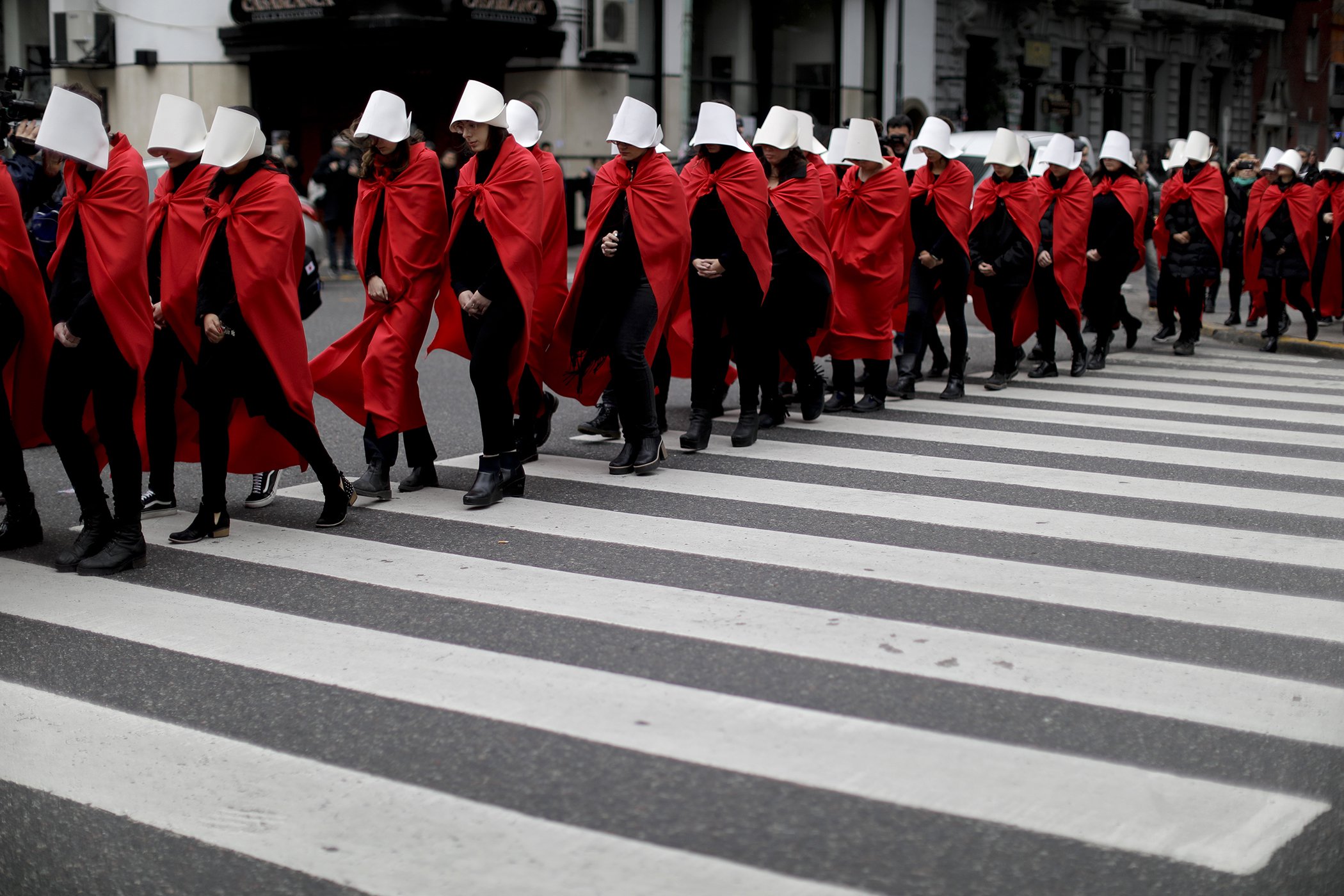 7)Women's Reproductive Rights: Activists wear costumes from "The Handmaid's Tale," a book and now television series, outside Congress, where lawmakers passed new, women's reproductive rights-related legislation which is scheduled to be voted on by the Senate, in Buenos Aires, Argentina, July 25. 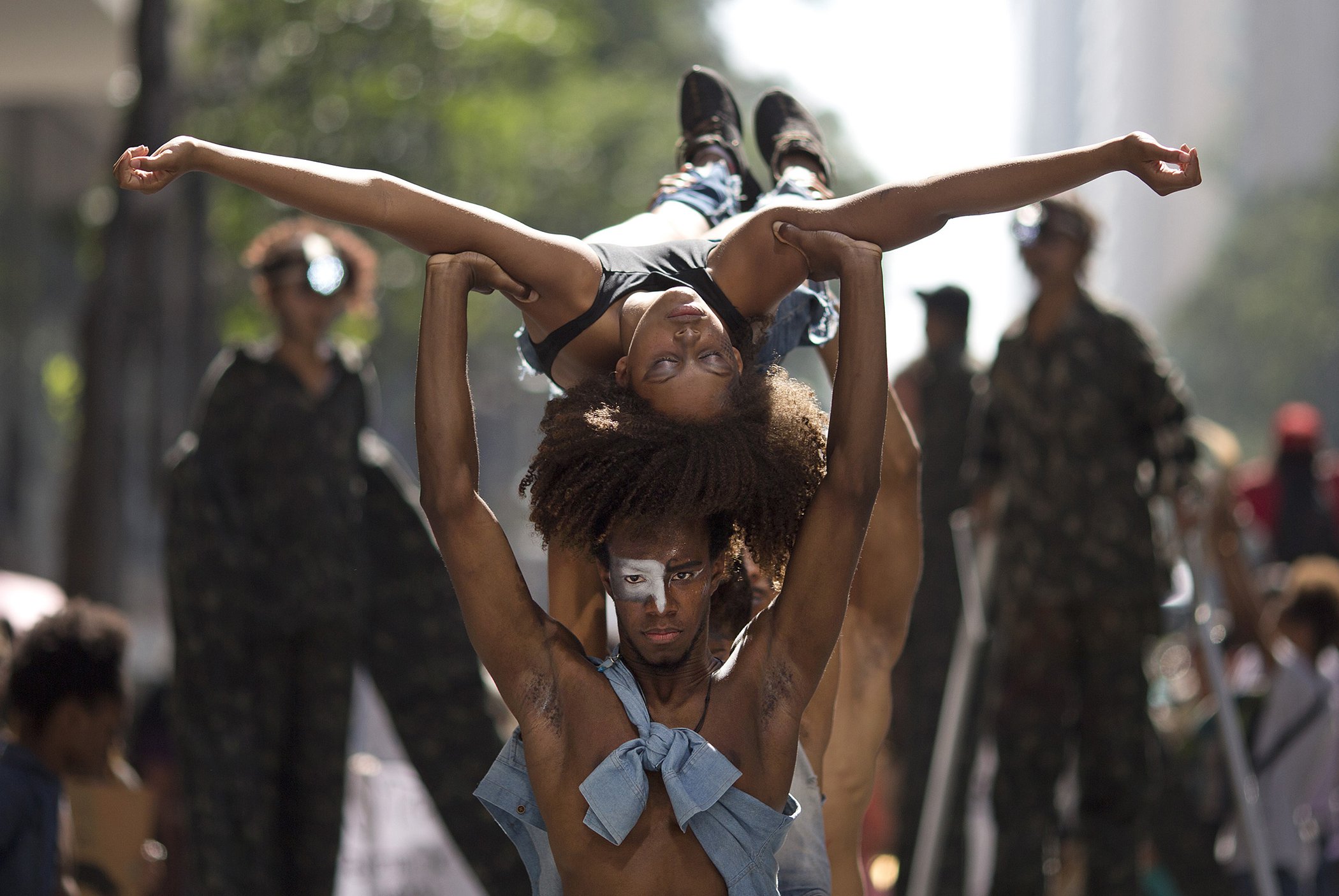 8) Protests in Brazil: Performers protest violence against black people in Rio de Janeiro, Brazil, July 23. Activists and relatives of black youth who have been killed in Rio de Janeiro marched to demand justice, as they also marked the 25th anniversary of the "Candelaria Massacre" when eight black youths were killed by police.

9) Heat Wave in Japan: A man wipes perspiration from his head in Tokyo on July 24, as Japan suffers from a heatwave. An 'unprecedented' heatwave in Japan has killed at least 65 people in one week, government officials said on July 24, with the weather agency now classifying the record-breaking weather as a 'natural disaster.'

10) Laos Dam Accident: A man wades through a flooded road at a village in Sanamxai, Attapeu province, on July 26. Rescuers battled fresh rains on July 26 to reach scores of people still missing after a dam collapse in southern Laos that unleashed a torrent of water, washing away whole villages and killing at least 26 people.

11) Summer Daily Life: Children play beside a lifeguard tower as sunset approaches at Sunset Beach in Huntington Beach, Calif., on July 21. An Excessive Heat Warning for the Los Angeles area has been issued beginning Monday morning until Thursday July 26 as Southern California faces its second major heatwave this summer.