Republicans can take apart the ACA, but what will replace it? 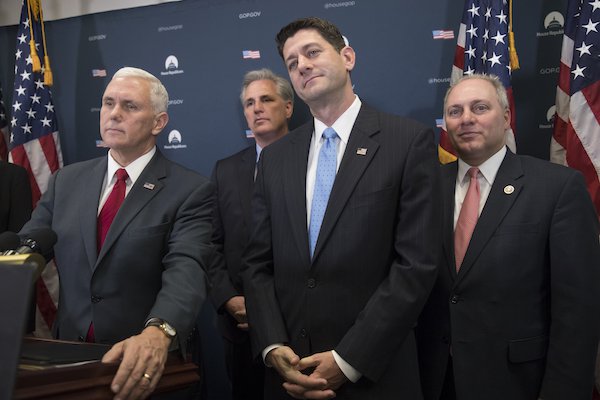 The political showdown over the future of American healthcare is getting heated.

As Congress began the 2017 session this week, Republicans made their first move to repeal and replace the Affordable Care Act, their signature campaign promise from the past year.

It’s not going to happen quickly, but there are major changes Americans should watch out for in the months to come. Here’s a primer on what you need to know.

1. The Repeal Effort Has Officially Begun

On Tuesday, Republicans followed through on their promises to make repealing “Obamacare” one of their first priorities of 2017. Congress introduced and quickly passed a budget resolution that would repeal some parts of the law. The changes will only go into effect if and when an entire budget bill is signed into law by President-Elect Donald Trump, which could take weeks or months.

2. The Political Battle & Jockeying for Public Perception Has Also Begun

In twin meetings staged on Capitol Hill Wednesday, Vice President-Elect Mike Pence met with Republican Congress members while President Barack Obama met with Democratic members as each side plotted their approach to the healthcare fight.

Obama, with only two weeks left in office, told the Democrats not to help “rescue” the Republicans and to brand the opposition effort “Trumpcare.” One lawmaker told CNN that Democrats on the Hill were “fired up” for the fight ahead, and some Dems have started using the phrase “Make America Sick Again” in their politicking.

Pence and Republican Congressional leaders said they would use executive actions and legislation to begin to dismantle the ACA, though they were less clear about what, exactly, would replace the current healthcare system. Rep. Chris Collins told CNN the party’s goal is to create a proposal within six months. Pence and Ryan promised a “careful” replacement of the law.

3. Republicans Can Only Repeal Parts of ACA Without Democrats’ Help

The Republicans can use executive action to change some parts of the ACA that President Obama enacted the same way, and they can use a simple majority in the Senate to repeal parts of the law that relate to spending. But they can’t change major structural parts of Obamacare without 60 votes in the Senate, and they only hold 52 seats, according to the Washington Post.

4. Republicans Have Not Yet Outlined Their Replacement for the ACA

A handful of Republicans have made proposals for what could replace the ACA, but the party has not coalesced around a plan that they have presented to the public as a better alternative than the current system. They promised a “patient-focused” replacement, in which Americans could keep their healthcare.

Trump advisor Kellyanne Conway told MSNBC that the “ideal” situation would include simultaneous repeal and replacement of the ACA, but that it might not be “practical.”

More than anything, Republicans want to nix the “mandate” from ACA, which requires Americans to have health insurance. Individuals can buy health insurance on the marketplace, get insurance through their employer, or enroll in a federal program like Medicare or Medicaid if they qualify. For those who don’t qualify for the special programs and don’t get health insurance from their jobs, they would have the option to drop insurance.

The ACA also expanded Medicaid coverage to include all adults ages 18 to 65 with incomes up 138% of the federal poverty level. Republicans want to reverse that expansion, so those who received coverage under the expansion could once again lose it. The Urban Institute estimates that 30 million people could lose coverage if the law is repealed.

6. The Benefits of ACA Would Be in Jeopardy

After the ACA was enacted, there was a dramatic drop in the number of uninsured Americans — through a combination of requiring individuals to purchase insurance under law and expanding Medicaid. National health spending also dropped, and the price of premiums increased less year-over-year than before the ACA was enacted, according to the Los Angeles Times.

7. Republicans Could Delay the Repeal & Replace

The GOP could vote this year to repeal President Obama’s signature legislation but delay the repeal from going into effect for a few years, essentially buying themselves some time to come up with a plan to replace it. This could also delay any outrage at a new plan until after midterm elections or, depending on how long they delay, until after the next presidential election.

If Republicans repeal the requirement that insurance companies cover pre-existing conditions, many Americans who finally got insurance under Obamacare could lose it and have a tough time getting new affordable plans. The GOP has not yet said whether they will take apart this part of Obama’s law.

9. Planned Parenthood Could Be De-Funded

Today, Ryan said that Republicans would also include a provision in the budget bill to defund Planned Parenthood. Democrats will not be able to filibuster the budget bill, and so it needs a simple majority of Republicans voting for it for it to pass. The bill could pass as early as next month.

While technically not part of the ACA law, the loss of funding to Planned Parenthood would be a major blow to women’s health. Planned Parenthood provides a range of healthcare services to women besides abortion, relies on the federal government for about 550 million in funding, or half of its total revenue, according to the Washington Post.