She’s an immigrant, a feminist, a runner, and a total badass. 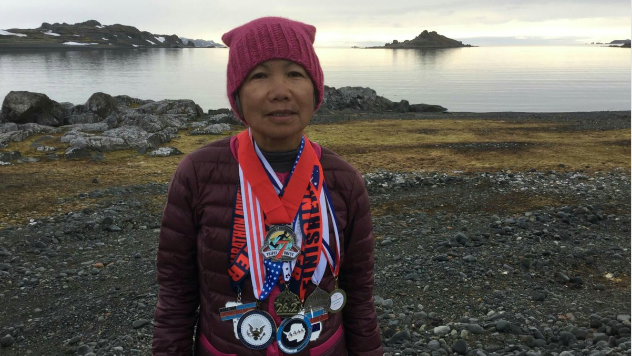 To celebrate her 70th birthday, Chau Smith ran 7 marathons on 7 continents in 7 days. You read that correctly.

Best of all, she completed the feat while wearing a pink pussyhat, popularized by the Women’s March on Washington.

Read More: This 105-Year-Old Woman Has Planted Hundreds of Trees in India

“All my life… I always did crazy things,” Smith told CNN. “When I was young in Vietnam, I was a stubborn kid. My family always never knew what I was going to do. I always showed them I can do it, just like boys.”

Smith completed the challenge, dubbed the Triple 7 Quest, through Marathon Adventures, who handled all the logistics, like plane tickets, hotels, and food. She had eight companions on her odyssey, six of whom joined her in running full marathons.

Smith was the oldest of the group, though not the oldest ever to complete a marathon. That distinction goes to 85-year-old Ed Whitlock, who ran the Toronto Waterfront Marathon in 3 hours 56 minutes 34 seconds.

Both runners leave stereotypes of aging athletes in their dust.

Chau Smith is a goddess https://t.co/TECbH4o8k4

Though Smith is actually 70 years old, officially, she’s 67. She was born in Vietnam in 1947 during the First Indochina War. Due to the conflict, her mother didn’t attain a birth certificate until she was 3 years old.

When Smith was 13, she was hit by shrapnel during the American War in Vietnam. She was hospitalized but for a week, but medical personnel were unable to remove all the pieces. They remain in her right arm and leg to this day and sometimes cause discomfort while she runs.

“I always try to train in my mind the good things,” she told NBC News. “So even when I’m really in pain, I’m able to think about something else positive. So you don’t think about, ‘Oh my god, it hurts so bad.’ You just think about, maybe, the waterfalls, the streams, and the lake.”

Smith has ran more than 70 marathons in her lifetime, and she’s just getting started. Marathon Adventures is currently working on a Triple 8 Quest, adding a race on the micro-continent Zealandia.

Not surprisingly, Smith wants to do it.