By Olivia Kestin  and  Avery Friedman

15 Compelling Photos From Around the World This Week

From quinceaneras in Texas to violists in Venezuela, here's what happened this week.

Syrian displaced family who fled from Raqqa city the battle between U.S.-backed Syrian Democratic Forces and the Islamic State militants, sit outside their tent at a refugee camp, in Ain Issa town, northeast Syria, Wednesday, July 19, 2017. The U.S. military is supporting local Syrian forces in a campaign to drive IS from Raqqa.
Hussein Malla/AP

By Olivia Kestin  and  Avery Friedman

Protests blazed on against Venezuelan President Nicolas Madura’s. Lanterns lit up the sky in Japan for the country’s annual “Marine Day” holiday, while across the ocean to the west, North Korean girls were photographed selling flowers at a kiosk.

In the Middle East, Refugees from Mosul and Syria continued their daily lives in various displacement camps in hopes of finding a permanent home.

1) Syrian Refugees: (Above) A displaced Syrian family, who fled from Raqqa city during the battle between U.S.-backed Syrian Democratic Forces and the Islamic State militants, sits outside their tent at a refugee camp, in Ain Issa town, northeast Syria on July 19, 2017.  The U.S. military is supporting local Syrian forces in a campaign to drive IS from Raqqa.

2) Japan Lantern Festival: People stand amongst candles lit inside paper lanterns while looking out at Rainbow Bridge (in background) in Copaiba Marine Park in Tokyo on July 17, 2017, as part of a lantern festival. The festival is held every July as a summer tradition on the Japanese holiday 'Marine Day'.

3) Venezuela Protests: A truck set ablaze by opposition activists block an avenue during a protest burns in Caracas, on July 18, 2017. The Venezuelan opposition called for a 24-hour national civic strike next Thursday to pressure President Nicolas Maduro to withdraw the call to a National Constituent Assembly, after achieving a massive vote of rejection in a symbolic plebiscite.

4) Vietnam Daily Life:  In this photograph taken on July 19, 2017, a bride and groom get their photo taken by a portrait photographer in the streets of downtown Hanoi.

5) Royals in Germany: Britain's Prince William, Duke of Cambridge (L) and his wife Kate, the Duchess of Cambridge visit the Holocaust Memorial in Berlin on July 19, 2017. The British royal couple is on a three-day visit in Germany. 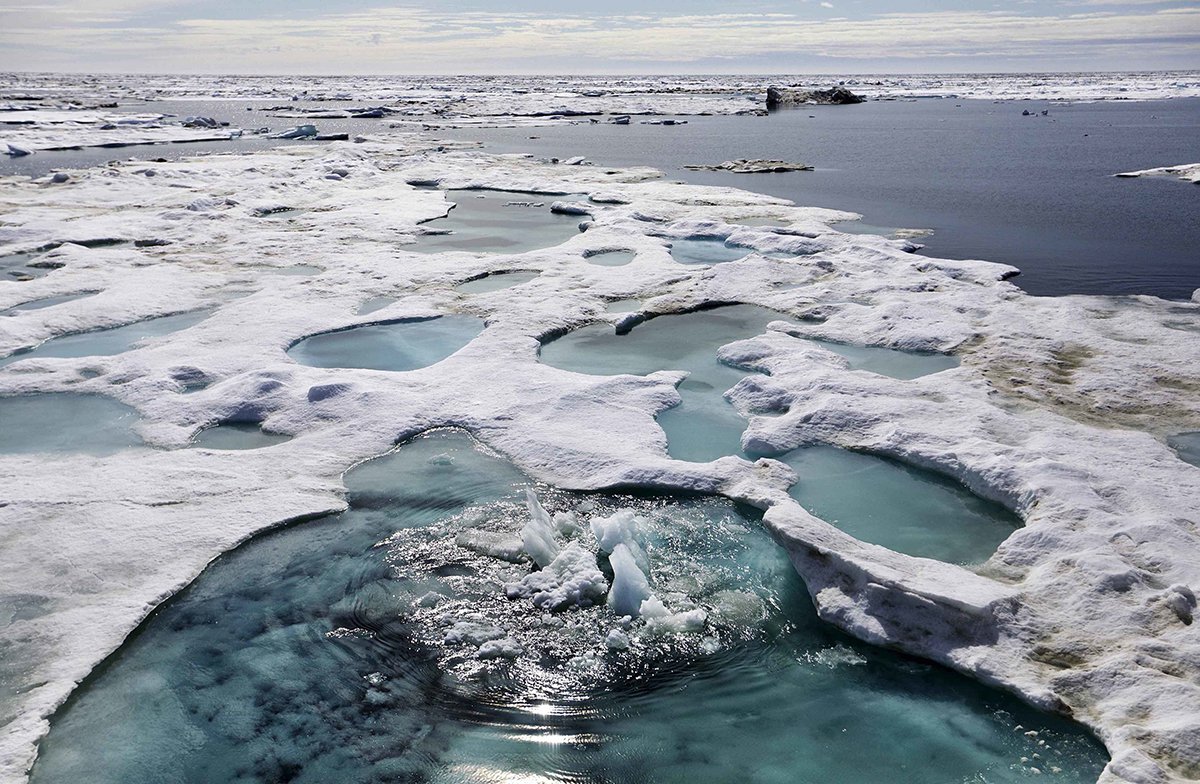 6) Arctic: Ice is broken up by the passing of the Finnish icebreaker MSV Nordica as it sails through the Beaufort Sea off the coast of Alaska while traversing the Arctic's Northwest Passage, July 16, 2017. The region has become a magnet for nations wanting to exploit the Arctic’s rich oil reserves and other natural resources and for scientists seeking to understand global warming and its impacts on the sea and wildlife. 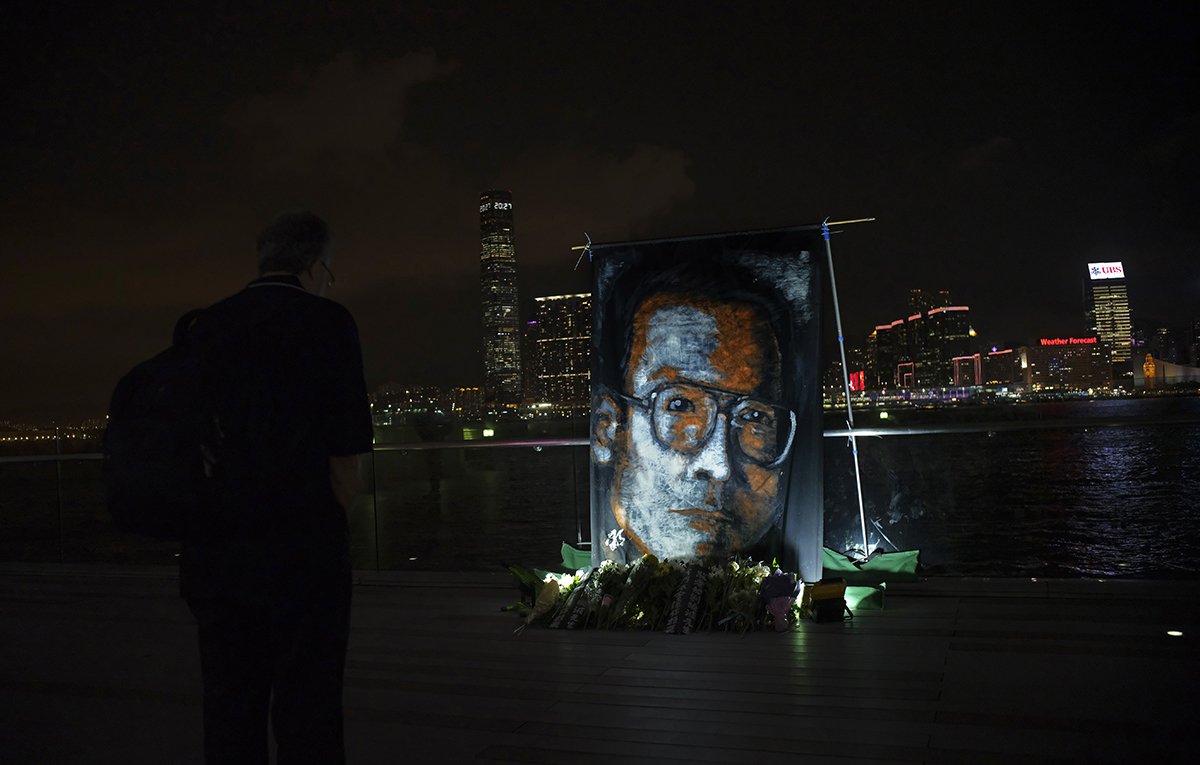 7) Memorial for Liu Xiaobo: A man pays tribute to late Chinese Nobel Peace laureate Liu Xiaobo at a downtown park against Victoria Habour in Hong Kong, July 19, 2017. On the seventh day after Chinese Nobel Peace laureate Liu's death, a day of significance in Chinese mourning rituals, his wife's whereabouts were unknown and her apartment complex remained under a security lockdown, while supporters congregated around the world to mark his passing in their own ways.

8) Iraq Conflict:  A Displaced Iraqi man, who had fled the violence around the northern Iraqi city of Mosul as a result of a planned operation to retake the Iraqi city from jihadists, walks at the Jadaah camp on the outskirts of Al-Qayyarah, south of Mosul, on July 19, 2017. On July 10, the authorities announced they had defeated the Islamic State group in Mosul after a nine-month campaign that unleashed destruction of almost unimaginable dimensions on the ancient city. 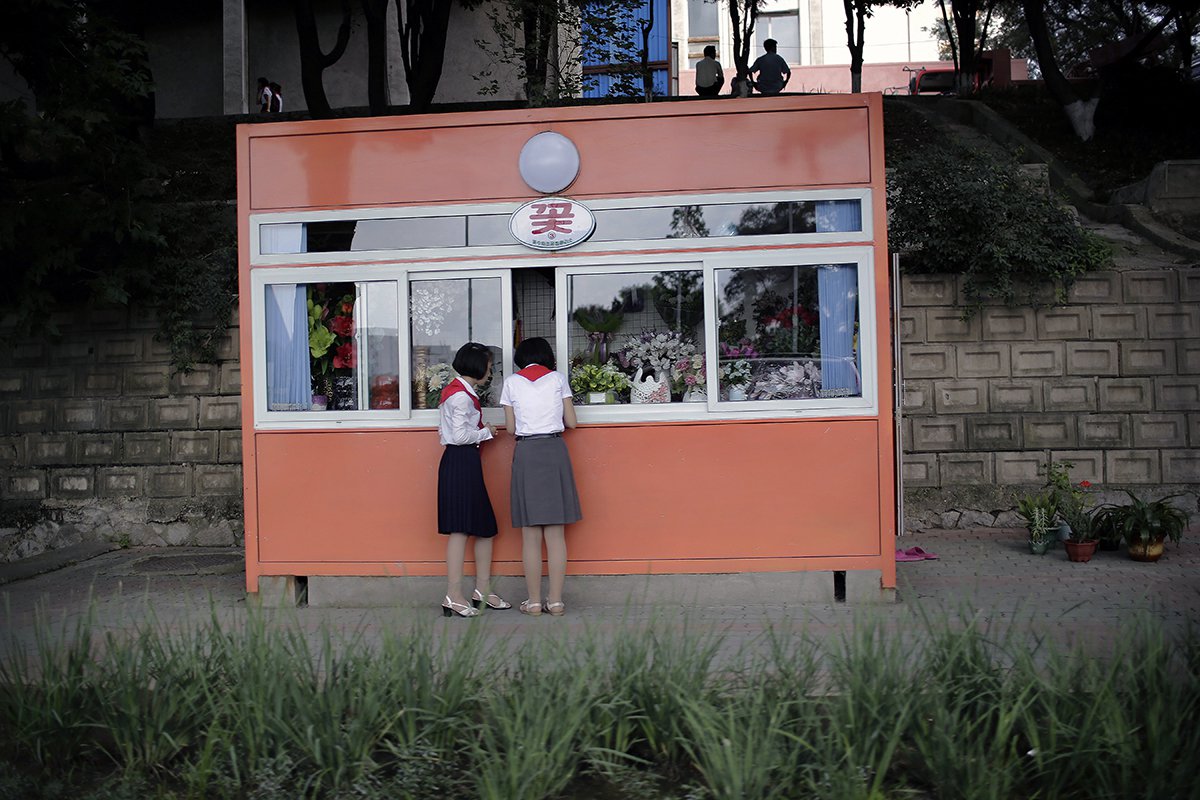 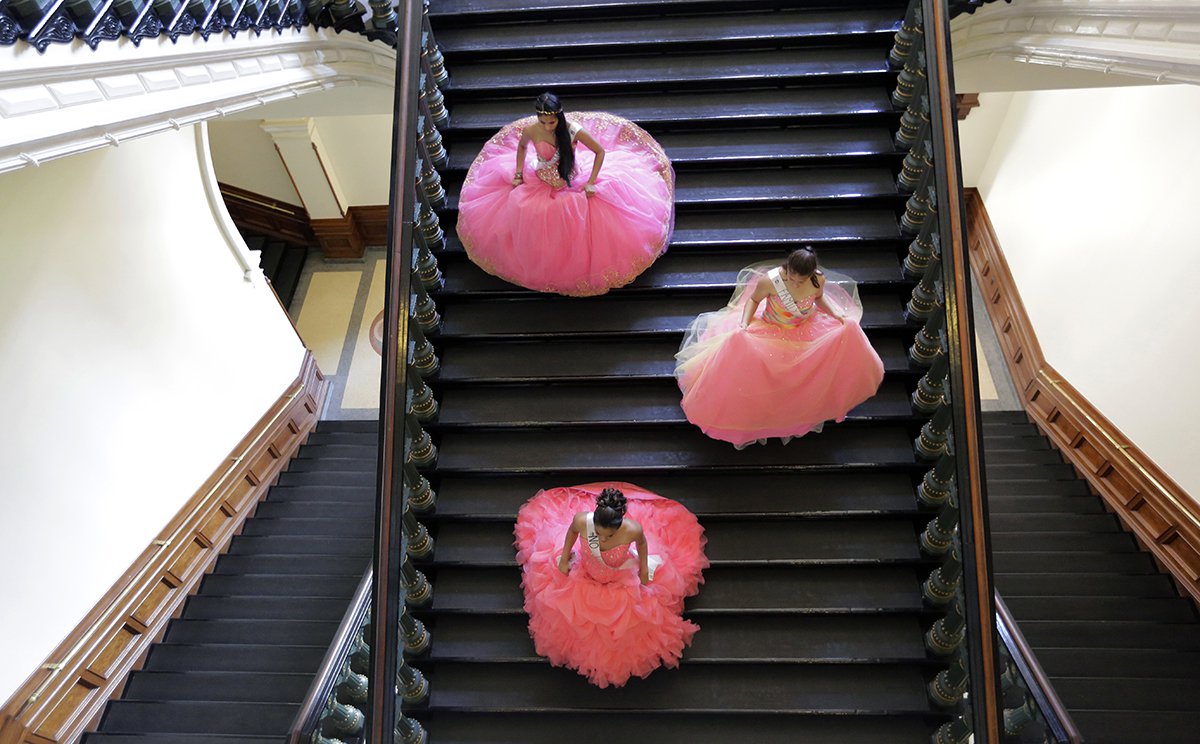 10) Protestors in Texas: Young women dressed as Quinceaneras walk through the Texas Capitol to visit lawmakers as they protest SB4, an anti-"sanctuary cities" bill, in Austin, Texas, Wednesday, July 19, 2017Texas' special session continues and conservatives in the legislature plan to work on anti-abortion measures, school vouchers and defying local ordinances in Texas' big and liberal cities.

11) Syria:  Members of the Syrian Democratic Forces (SDF), an alliance of Kurdish and Arab fighters, drive on the western front in Raqa on July 19, 2017, during an offensive by the SDF to retake the city from Islamic State (IS) group fighters. 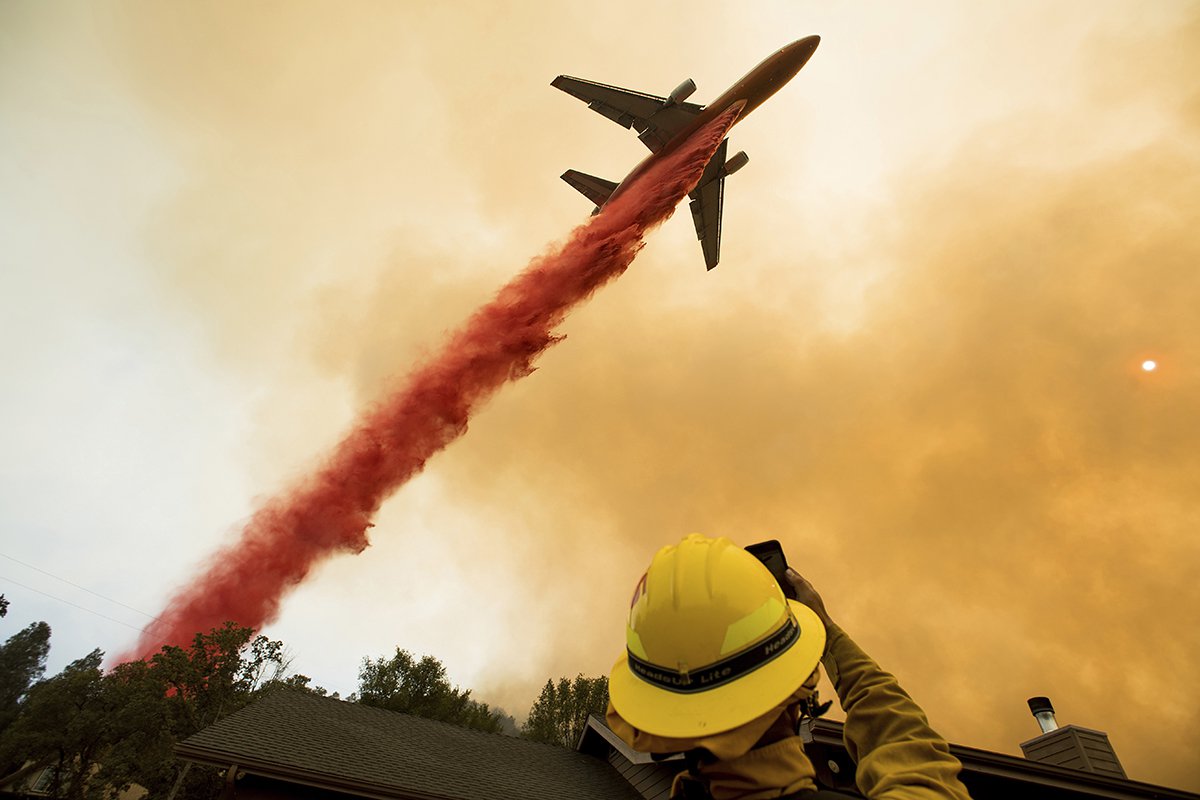 12) Western Wildfires: An air tanker drops retardant while battling a wildfire near Mariposa, Calif., Wednesday, July 19, 2017. The fire has forced thousands of people from homes in and around a half-dozen small communities, officials said. 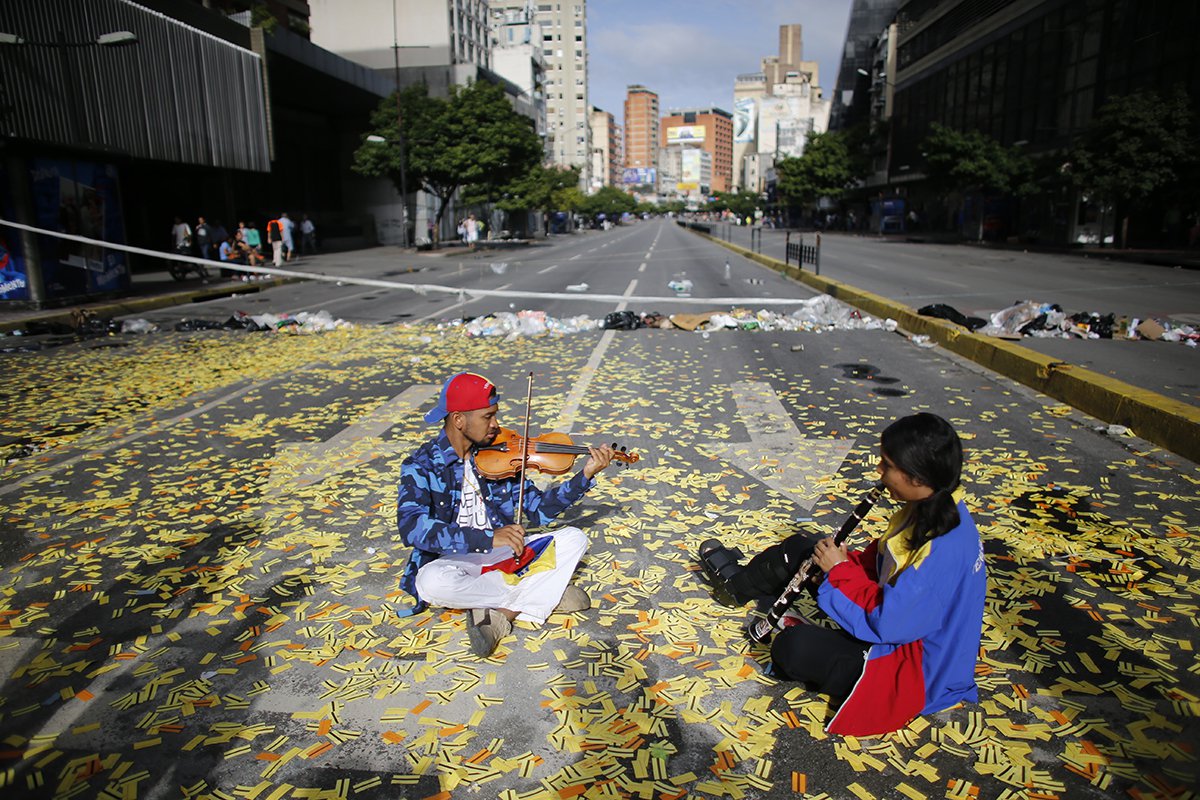 13) Venezuela Protests: Musicians play their instruments as they sit in the middle of a road littered with metro tickets at a roadblock set up by anti-government protesters in Caracas, Venezuela, Thursday, July 20, 2017. Venezuelan President Nicolas Maduro and his opponents face a crucial showdown Thursday as the country's opposition calls a 24-hour national strike. The country's largest business group, Fedecamaras, has cautiously avoided full endorsement of the strike, but its members have told employees that they won't be punished for coming to work. 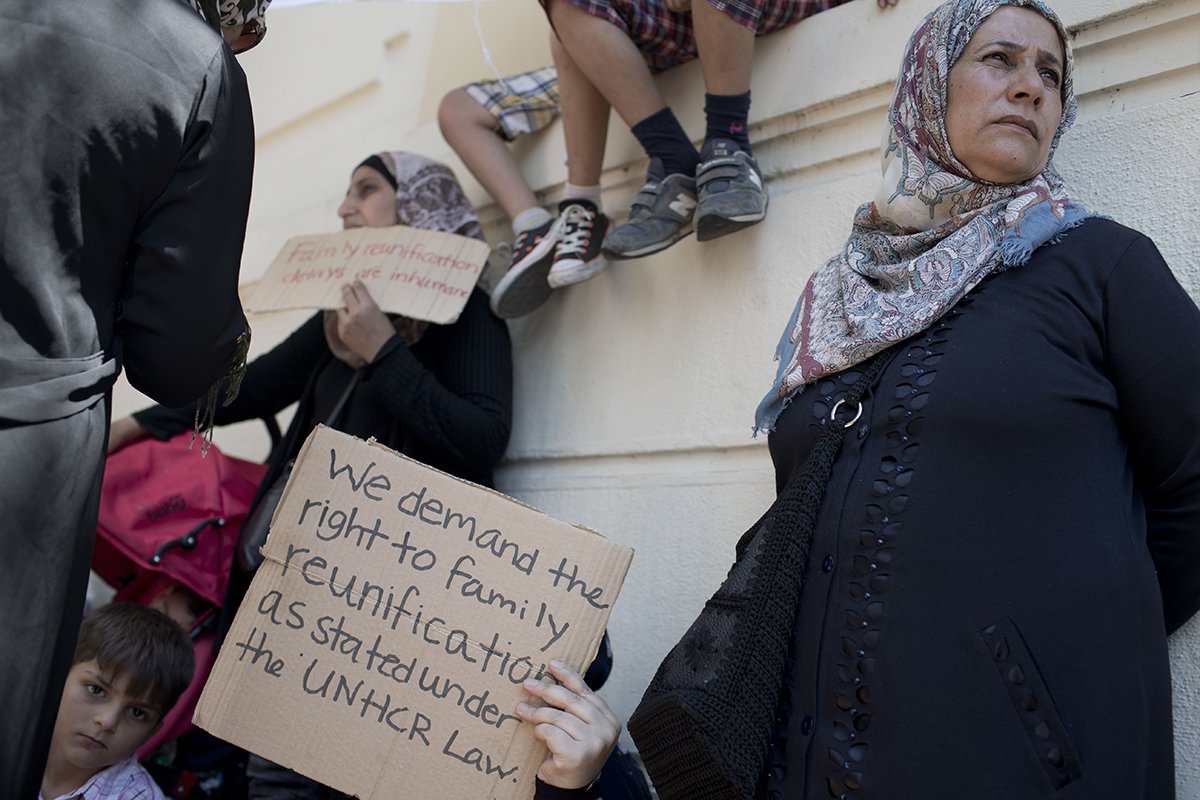 14) Refugee Protest: Stranded migrants and refugees hold placards as they protest outside the German Embassy in Athens, on Wednesday, July 19, 2917. About a hundred people, most of them from Syria, marched to protest Germany's decision to limit number of family reunification from Greece.

15) South Africa: Residents look from a terrace at municipal workers clearing the belongings of evicted residents of the Fattis Mansion in Johannesburg, on July 21, 2017. Residents of the allegedly illegally occupied building were forcibly removed by dozens of red clad security men and their belongings lay on the pavement outside the building. Several buildings in the central district of Johannesburg are illegally occupied by a large number of residents, often migrants, who live in substandard conditions.