Girl, 12, Tells Clinton to ‘Keep Your Chin Up’ in Awesome Letter

“I think it captures a lot of feelings of little girls her age,” said her father. 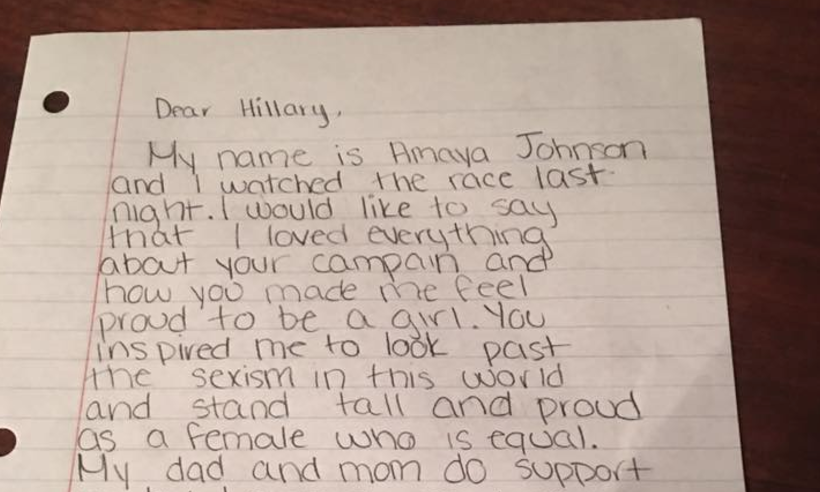 Hillary Clinton gave a stunning and empowering speech to her supporters Wednesday after she conceded from the US presidential election. Even in her surprising defeat, she held her head high.

President Obama, and other global leaders shared inspiring words on Clinton’s campaign and the example she sets for girls and women. Though she didn’t win the presidency, she changed the course of history and letters of support are still being sent.

There was a letter from Leslie Knope, but the most poignant letter came from 12-year-old Amaya Johnson, from the surprisingly close swing state Michigan where Clinton lost by just 11,837 votes.

Amaya beautifully put into words the sentiments many adults know they should be feeling but are having trouble grasping: to keep fighting for the rights of women and not give up hope. Johnson also captured the inspiration that seeing a woman run as a candidate for a major party, and win the popular vote gave to women.

“You inspired me to look past the sexism in this world and stand tall and proud as a female who is equal,” Johnson wrote.

“My dad and mom do support you, but I support you because your [sic] a beautiful, successful, caring and extremely inspiring person who has what it takes to lead this country,” she continues in the letter.

Her last words truly amplify the sincerity and hopefulness that is the most inspiring part of the letter.

“While we might not have won, remember to keep your chin up because me, and many other girls in this country believe in you,” Johnson wrote.

Johnson is currently a straight-A student at her middle school in Michigan according to her father Jerrod Johnson, and she’s uncertain whether she is interested in a future in politics.

“I think it’s very poignant for a kid that age,” said her father. “And she did it of her own free will, which is amazing to me. I think it captures a lot of feelings of little girls her age.”

Her sentiments capture the way not just little girls feel, but how many people of all ages and genders feel around the world. If a girl at 12 can remain this poised, positive, and hopeful — so can each of us.

The glass ceiling may not have shattered yet, but strong girls like Amaya Johnson are the key to breaking those boundaries and bright future.

If you want to write a thank you card to Clinton, send it here: