This 105-year-old Aboriginal Australian inspires the world with artwork

And she still prefers footwalking to sitting in a gallery which makes her “cranky.” 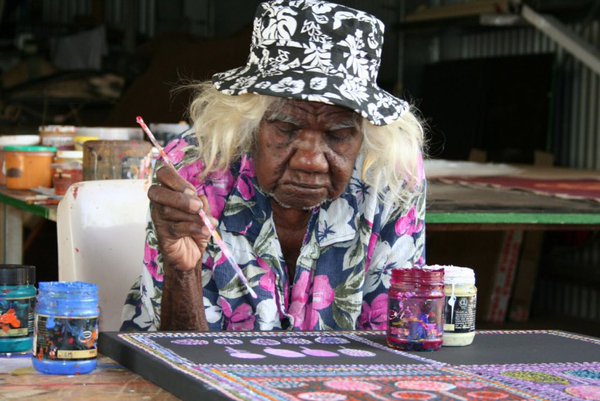 At the sprightly age of 95, Loongkoonan began painting original artwork of bush tucker and landscapes of Nyikina Country in Western Australia.

Now she is 105 years-old and her paintings are displayed in the Mossenson Galleries throughout Australia and her art will show in the US for the first time at the Australian Embassy.

If you will be in Washington DC before Apr 26, be sure to visit Australian Embassy to see Loongkoonan's work. https://t.co/rElYCv6Q6k

Her niece suggested she try painting just over a decade ago, and she has enjoyed using artwork to reflect her memories of “footwalking” during the wet season when she wasn't working on the cattle ranch. Painting allows her to honor the native plants and medicine she recalls from her childhood.

Her paintings are highly detailed, vivid in color and reflect the botanical diversity in the Nyikina Country.

One of her paintings depicts the Fitzroy River as a bright yellow line surrounded by mutli-colored dots of magenta, orange and white representing trees and the riverbank, outside that squares lay her imaginings of plant food collections. 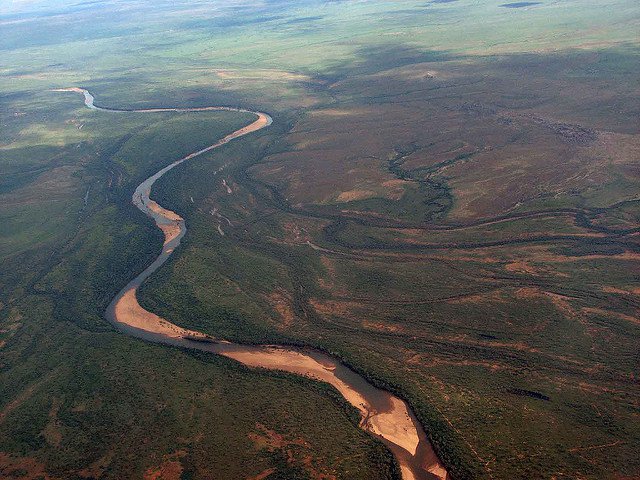 The Fitzroy River, known to the Nyikina indigenous community the Yimarrdoowarra as the Mardoowarra.
Image: Flickr: yaruman5

“Loongkoonan’s work challenges expectations about what some international collectors expect of Aboriginal art — dot and ochres,” former Paris-based Aboriginal-art dealer Mary Durack says in this article from Women in the World. “That Loongkoonan’s work doesn’t comply with this is what makes her works so special. She is completely original.”

Loongkoonan is breaking barriers for artists by mixing cultural aboriginal techniques with contemporary colors and shapes. More than that, to start a hobby and end up in international galleries at the age of ninety-five is inspiring in itself!

Loongkoonan proves it’s never too late to start something new, and that you never know what hidden talents you may uncover.

Born around 1910 on the Mount Anderson Station—a cattle station in the Kimberely region of Western Australia—she is the oldest living speaker of the Nyikina language (which is in danger of being lost). Revered as a leader in the Nyikina community, she is now honored around the world.

While she’s thrilled her work in shown internationally, she’s like most global citizens and “gets cranky if her whole time is spent just in a gallery.”

Cheers to Loongkoonan, an inspirational matriarch, for sharing her perspective with the world!

Check out her artwork here. And if you’re in DC, Charlottesville or Perth you can visit the galleries where her work is on exhibition.