But the US still ranks 66th for gender equality in political empowerment. 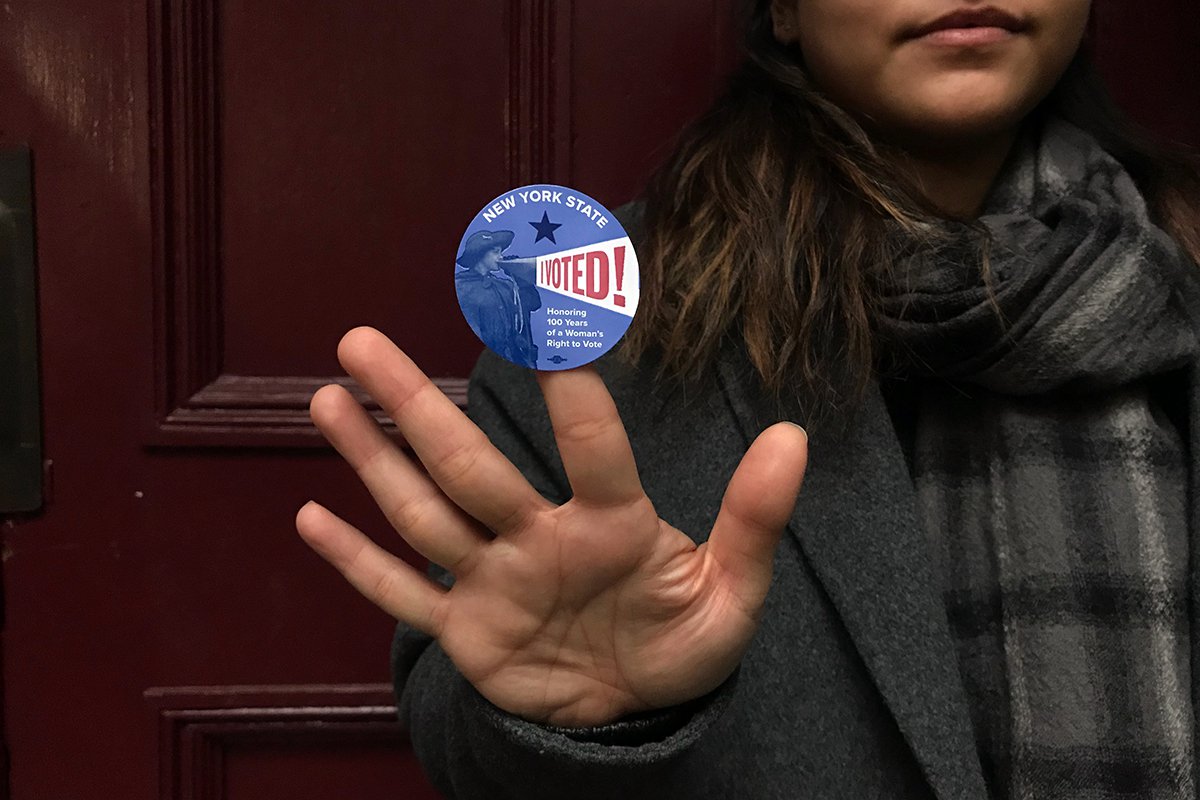 As people across the US head to the polls to vote today, women in New York have special cause for celebration: the 100th anniversary of women’s suffrage in the state.

In 1917, after 50 years of suffrage marches and rallies, New York became the first state in the Easten US to grant women the right to vote — three years before the 19th Amendment was passed giving women across the country the right to vote.

Today — a year after Hillary Clinton appeared on the ballot as the first female presidential candidate from a major political party — women across New York state happily exercised and celebrated their right to vote.

In my head on repeat today, thanks to the badass new stickers from @NYCVotes commemorating 100th anniversary of Women's Right to Vote! #gotvpic.twitter.com/zo1rGpMLIs

@womensmarch gotta have the right outfit for #ElectionDaypic.twitter.com/XOw6nxkKqT

Many voters took a moment to acknowledge the struggle of those who came before them and fought for women’s suffrage.

It's also almost 100 years of a Woman's Right to Vote! Do it for the ladies who fought for this privilege, and for those who don't have it.

Talked with a poll worker about how it’s been almost 100 years since women got the right to vote. She told me to never stop fighting for it.

Get out there & vote! Special thx to the suffragettes (including our own Susan B.) for 100 yrs of women’s #suffrage here in NY. #VoteTodaypic.twitter.com/mYjw8DF1ek

Today we mark 100 yrs since women won the right to vote in NY. I commend all the women who fought for decades for this sacred right

The state even commemorated the occasion with celebratory stickers handed out at polling stations.

Did it for the stickers & to celebrate 100 yrs of women’s right to vote & bc it takes two minutes & is one of most imp things ill do this yr pic.twitter.com/bkhk5VGzJM

And the Empire State Building was lit in honor of the centennial of women’s suffrage in New York.

Tonight our lights will glow purple and yellow, honoring the 100th anniversary of women's suffrage in the New York State. pic.twitter.com/WaBVAvVvjq

While it has technically been 100 years since New York granted women the right to vote, many on social media have pointed out that women — and most men— of color were excluded from this right for several decades more.

"100 Yrs of a Woman's Right to Vote" erases Black, Asian, Native Am women who didn't have the right to vote until long after white women. pic.twitter.com/jz8GmYbPa2

Women haven’t had the right to vote for 100 years. White women have, everyone else had to wait till 1965 #votingrights#whitewashing

Women around the world have fought for the right to vote and participate in their political systems. In 2011, King Abdullah of Saudi Arabia issued a decree ordering that women be given the right to vote, leaving the Vatican City as the last remaining country in which women cannot vote as the right is reserved for cardinals, who are exclusively male, and the only election held is for the role of pope of the Catholic Church.

But the right to vote is just one means of empowering women to engage with their government and political system.

Global Citizen campaigns in support of gender equality and against gender discrimination. You can take action here.

No country has closed the gender gap in political representation and empowerment, according to the World Economic Forum’s 2017 Global Gender Gap report, though Iceland comes the closest with women holding 48% of its parliamentary seats.

Read more: 7 Feminist Laws Iceland Has That the World Needs

The US trails far, far behind Iceland, ranking 66th out 144 countries in terms of gender equality in politics, according to the WEF report. And though women in New York should celebrate this hard-won right today, the US as a whole has a long way to go before it reaches gender parity in politics.

But the first and simplest step toward achieving gender equality in politics is exercising the right to vote.