Just one infected person could cause a global epidemic. 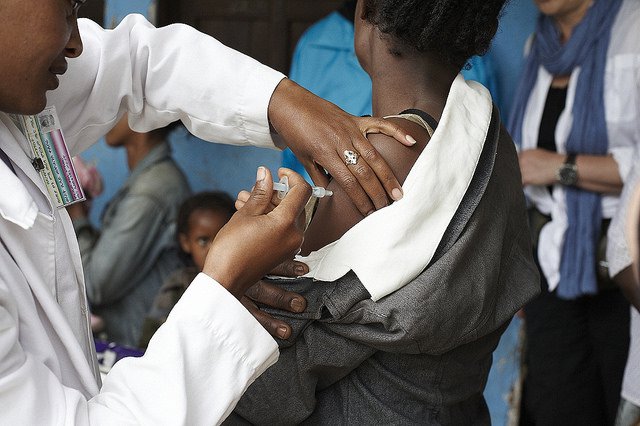 But 1 in 10 children around the world are still at risk of dying from these diseases.

In 2016, around 12.9 million infants worldwide did not receive their vaccinations, according to UNICEF.

Over 7 million of the children who did not receive immunization live in countries such as Afghanistan, Nigeria, and Pakistan, where conflict prevents access to basic health care.

“If we are to raise the bar on global immunization coverage, health services must reach the unreached,” said Dr Jean-Marie Okwo-Bele, Director of Immunization, Vaccines and Biologicals at WHO.“Every contact with the health system must be seen as an opportunity to immunize.”

Among those unvaccinated in 2016, 6.6 million children received their first dose of the DTP vaccine, but did not finish the three-part series required to actually prevent the diseases.

Read More: Polio: Why It Hasn’t Been Fully Eradicated — Yet

In 2015, around 134,200 people died of measles, that’s 15 deaths every hour. Measles is a deadly disease that results in death in 10% of cases, and most severely affects children under 5 years. A majority of measles related deaths occur in developing parts of Africa and Asia, although any unvaccinated child is at risk. Among these countries, those that experience natural disasters or armed conflict are affected the most by measles outbreaks, as inability to access health clinics and overcrowded refugee camps foster the disease’s spread.

The statistics for polio are even more alarming. In every 200 cases of polio, one results in paralysis. Of those paralyzed, 5% to 10% of patients die. Polio is highly contagious, and even one infected person could cause another global epidemic. The disease is still prevalent in Afghanistan, Pakistan, and Nigeria—the same nations where most children are not receiving their DTP vaccines.

UNICEF reports that middle-income countries, without external health aid, cannot keep up with the costs of new, improving vaccinations. High costs, in addition to the difficulty of reaching areas cut off by war, have put these countries among those with the lowest rates of child immunization.

Last year, WHO announced it was working to reduce the cost of vaccinations in conflict-zones.

Other efforts have been made to improve women’s rights to increase rates of immunization. Improving access to education and allowing women to leave the house freely makes it more likely that mothers  will have the knowledge and power to access vaccinations.

WHO has set the global target of immunization at 90%, although only 130 of 194 WHO member states have achieved this goal. Since 2010, the global percentage of children who completed their vaccinations was 86%, a number that has made no significant change since.

“Immunization is one of the most pro-equity interventions around,” says Dr Robin Nandy, Chief of Immunizations at UNICEF. “Bringing life-saving vaccines to the poorest communities.