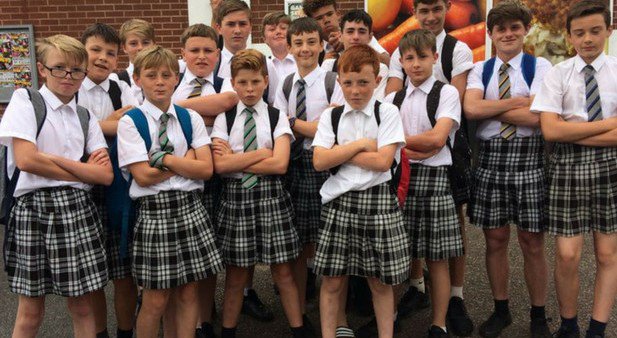 Summer has hit Britain this week with record breaking June temperatures soaring up to 30 degrees Celsius. However, while much of the country has enjoyed sunbathing and the Great British outdoors, one group of young students has had a very different experience as a peaceful protest erupted within their school.

After being banned from wearing shorts in this week's extreme heat, boys from ISCA Academy in Exeter came up with an inventive campaign: wearing skirts to school. These creative boys are taking a stand against what they believe are unfair dress codes. It has been reported that they have vowed to keep wearing skirts “forever” — or at least until someone listens!

"They kept telling us off for wearing shorts and I kept getting excluded," one of the first boys to protest said. "It happened three times. We kept talking about wearing skirts and on Tuesday I thought — right, I'm just going to do it. Then on Wednesday there were five of us. Today there were 50-plus people." 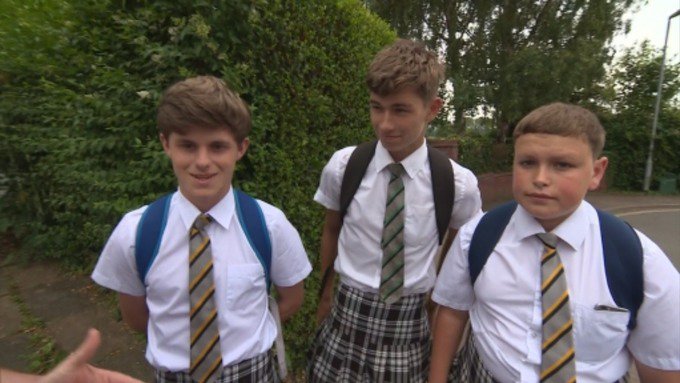 Image: Twitter
The dress code at the academy dictates that boys must wear trousers and that “shorts are not currently part of our uniform.” Controversially, girls at the same school are permitted to wear either trousers or a school skirt. This imbalance of rules between genders has sparked the boys of ISCA to speak out and show that both girls and boys should be allowed the same opportunities.

"Children also don't like injustice," one parent told local reporters. "The boys see the women teachers in sandals and nice cool skirts and tops while they are wearing long trousers and shoes and the older boys have to wear blazers. They just think it's unfair that they can't wear shorts in this heat. They are doing this to cool down – but also to protest because they don't feel they have been listened to."

In a brilliant example of teen spirit, girls of the school are said to have been especially supportive, with over 50 girls lending school skirts to their male counterparts in order for them to participate.

Support for the boys’ campaign has been unprecedented as many parents and media outlets have backed the protest. Even a Channel 4 presenter, Dr. Christian of ‘Embarrassing Bodies’, took to Twitter to show his support!

I love this story too! Boys at Exeter academy wear skirts in uniform protest. Boys, I'm with you! It IS too hot! https://t.co/ojKOlRDgF7

In response to the boys’ extremely successful campaign, the Headteacher has responded with a statement:

“Contrary to news reports, we have not banned shorts; shorts are simply not part of our school uniform. However, as summers are becoming hotter, shorts will be introduced as part of our school uniform next year having first consulted with students and parents. We feel that introducing a change in uniform part-way through this year would put undue pressure on some of our families.”

So can we see this as a partial victory for the boys?

One parent said, "I feel extremely proud of them all for standing up for their rights. People are always talking about equal right for males and females and school uniform shouldn't be any different."