This NHS Worker’s Family Has Been Hit by Malaria and Polio. Now She’s Raising Her Voice.

Hauwa Mohammed is a true Global Citizen — we asked her why campaigning on health care is so vital.

Why Global Citizens Should Care
The UN’s Global Goal 3 calls for good health and wellbeing for everyone. Hauwa Mohammed’s campaigning efforts are a great example of someone who’s been impacted by global health issues like polio and malaria and is taking steps to help make these diseases a thing of the past. Join the movement by taking action here to drive progress towards ending them for good.

For Hauwa Mohammed, making sure everyone in the UK can access health care is a way of life.

Mohammed, who moved to the UK in 2001, now works as an administrator at an NHS hospital in Cambridge. But she has also seen firsthand the devastating impact that a lack of access to proper health services can have on a family.

She’s seen her family — most of whom are still living in Mohammed’s home country of Nigeria — through polio, malaria, and many other infectious diseases, she tells Global Citizen.

She describes how a cousin of hers, Abdullah, contracted polio when he was very young and has been left financially dependent on his family.

“He did survive,” says Mohammed, who was raised in Maiduguri in the north of Nigeria. “But he’s completely disabled now. His legs bend so he has a limp, and he went to school and he has a diploma but he can’t get a job.

“He wants to be a customs officer,” she adds. “He went to the screening but they said no, they can’t take him.”

But Mohammed mostly remembers the confusion around Abdullah’s original diagnosis, because the family went so long without being able to say definitively what was making him so ill.

Ähnliche Geschichten 3. Mai 2019 I Was a Midwife in a Greek Refugee Camp at the Height of the Crisis. Here's What I Learned.

“But no one knew at the time. He was so ill, very ill for a long time as a child, and then eventually it affected his mobility,” she says.

As a result of her own experience of polio, Mohammed has become a passionate supporter of campaigning efforts to help eradicate the disease and improve the state of global health care.

As well as taking action on the Global Citizen website Mohammed has also headed to the heart of UK government, London’s Westminster and Whitehall, to speak out in support of vaccinations and the importance of global health care.

On July 2, she spoke about vaccines to Philippa Whitford, an MP for the Scottish National Party, a breast surgeon, and the chair of the All-Party Parliamentary Group (APPG) for vaccines. And on July 16, she headed to Whitehall to help hand in a petition signed by 27,782 Global Citizens calling on the UK government to invest in vaccines. 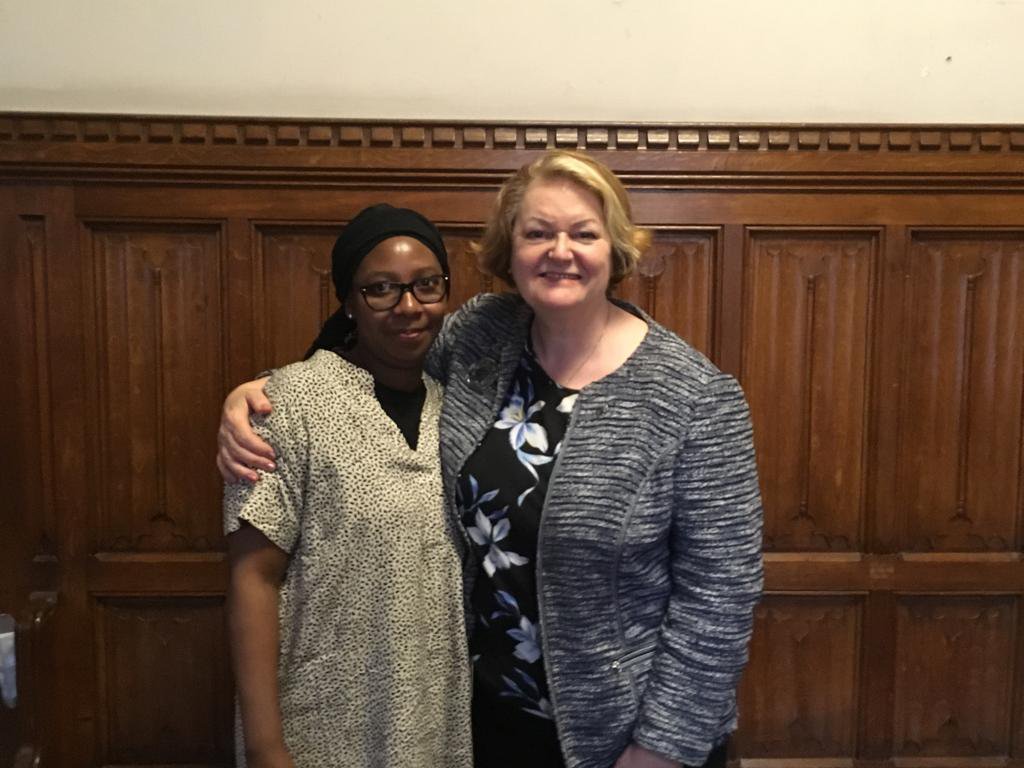 In the last couple of decades, the world has made huge progress on health care, and specifically towards eradicating polio for good.

Since 1998, a global partnership known as the Global Polio Eradication Initiative (GPEI) has reduced polio cases around the world by 99.9% — bringing humanity to the verge of one of the “greatest public health achievements in history,” according to GPEI.

To hit you with some numbers showing just how much impact the effort has had: In 1988, there were 350,000 cases of wild poliovirus from 125 countries.

In 2017, there were 22 cases of wild poliovirus reported in just two countries: Pakistan and Afghanistan.

Nigeria is also still considered a polio-endemic country (one of just three in the world, alongside Pakistan and Afghanistan), after a case of wild polio was detected in July 2016 after two years without detecting a case.

According to GPEI, it was a “sobering reminder” of just how complex it is to eliminate polio, especially in areas — like northern Nigeria — where there are ongoing conflicts and humanitarian crises.

Nevertheless, polio is preventable and vaccination programmes working with frontline community workers have really been driving the global crackdown on the life-threatening virus.

As Mohammed says, “Vaccines should be available to everyone for polio.”

But, she highlights, vaccinations have a problem with press in Nigeria too — similar to the surge of anti-vaxxer social media posts that have been widely blamed for outbreaks of measles in the US, in Europe, and elsewhere.

“The issue with vaccination in Nigeria is that there are a lot of campaigns going on against vaccines,” Mohammed adds. “Conspiracies I would say, and campaigns against families and children getting vaccines.”

“They are linking it to a family planning issue,” she continues. “They are saying the vaccine leaves women not able to have children, that it’s come from the Western world to stop population growth in poorer countries, especially in Africa.

“There are some that are even educated, doctors there, which I’ve tried to explain to them but they are seeing me as someone who has been kind of brainwashed,” she adds.

This is an issue that’s also been identified by a global partnership called Gavi, the Vaccine Alliance, which has vaccinated over 700 million children around the world and saved over 10 million lives in just 18 years of existence.

Gavi has reported about rumours being spread of vaccinations being the product of a Western plot to “control the Muslim population” in Nigeria for example, noting that the origin of the rumours isn’t really known.

One community immunisation advocate, Yusuf Ibrahim, told Gavi: “At some point — I don’t recall when — I was told that vaccinations make men impotent. It made sense to us. The elders told us, ‘Why else would these people who don’t know you give you anything for free? They are doing it for family planning.’”

Ähnliche Geschichten 24. Oktober 2018 A Father, a Teenager, a Vaccinator: 3 People From 3 Countries on the Frontline of the Fight Against Polio

Malaria, meanwhile, is one of the main killers of children under 5 in Nigeria, and Mohammed has also seen its devastating impact on her family.

“I’ve lost many family members, especially the younger ones, to malaria,” says Mohammed.

“There’s a lack of diagnostic tests in some areas,” she adds. “They can’t access it easily, because of the condition of where they are living. To me, it’s something that should be available to everyone to access easily, to get tested, and then the medication should be available for everyone as well.”

Malaria is a hugely widespread threat to people’s health in Nigeria, particularly children. Globally, a child is killed by malaria every two minutes, according to UNICEF.

Of the world’s estimated 219 million cases of malaria, some 25% were in Nigeria, according to the World Health Organisation’s latest stats, published in November 2018. That means Nigeria is the highest burden country in the world for cases of the mosquito-carried disease.

An international partnership called the Global Fund works to tackle malaria, tuberculosis, and HIV/AIDS, as the world’s three most deadly infectious diseases. Since 2002, it has helped save more than 27 million lives and reduced deaths from the three diseases by more than a third in the countries where it invests.

Ähnliche Geschichten 18. Oktober 2019 This Couple Have Been Married for Over 40 Years After Meeting as Toddlers on a Polio Ward

So far, more than 22,000 Global Citizens have signed a petition that calls on world leaders to fund the Global Fund.

And the UK has also been instrumental in its support for the Global Fund. Just this month, Britain announced a funding pledge to the partnership for the next three years that will help save millions of lives — and was described by the Global Fund as “outstanding leadership in global health.”

For Mohammed, education is really the key to ensuring that vaccinations, diagnoses, and treatments are made available to everyone, and that everyone has good rights when it comes to their health.

When asked whether she had noticed differences between health care on the NHS, and health care in Maiduguri, Mohammed says it’s “completely different.”

“I think health is part of a human right, especially for children and the vulnerable population,” she adds. “Everyone should have access to that basic care, like here on the NHS … We have one of the best health care systems in the world here, so in light of that, we should get involved to take that lead.”

Global Citizen Prize at the Royal Albert Hall in London on Dec. 13 is the first major event in our 2020 campaign, Global Goal Live: The Possible Dream. The year-long campaign will focus on three crucial areas: the climate crisis, gender equality, and human capital — empowering people to lift themselves out of poverty through access to quality education, nutritious food, and universal health systems. Vaccinations are one of the most effective ways to ensure good health and end preventable deaths, in line with the UN’s Global Goal 3 for health and wellbeing.

Next year will be vital for global health efforts, with the UK set to continue its world-leading efforts on health by hosting a major global conference on vaccines — a replenishment moment for Gavi, the Vaccine Alliance. Gavi’s efforts over the past two decades have already seen more than 700 million children vaccinated, and 10 million lives saved as a result. You can join the movement to end extreme poverty and ensure that everyone has access to vaccines by taking action with us here.