Michelle Obama Addresses the Racism She Faced as First Lady

“The shards that cut me the deepest were the ones that intended to cut.” 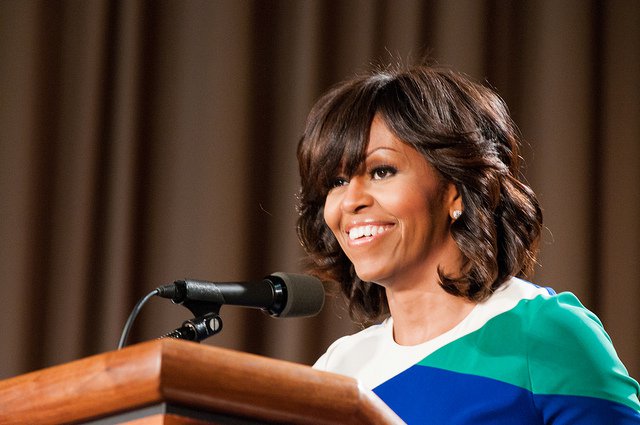 On Tuesday, Michelle Obama showed that she still sticks to that motto she used a year ago at the Democratic National Convention. In Denver at the Women’s Foundation of Colorado’s (WFCO) 30th anniversary event, Obama opened up about her experiences choosing to “go high” amid the racist attacks she faced as America’s first black first lady.

In the former first lady’s interview with WFCO’s CEO and President Lauren Casteel, at the same Denver convention center where she spoke at the 2008 DNC, Casteel noted that Obama broke a glass ceiling by becoming America’s first-ever black first lady.

When asked which falling glass shards cut her the deepest, Obama told to a crowd of 8,500 that, “The shards that cut me the deepest were the ones that intended to cut.”

She expressed difficulty in “knowing that after eight years of working really hard for this country, there are still people who won’t see me for what I am because of my skin color.”

The former first lady was the target of many racist and sexist insults during her husband Barack Obama’s presidency. In the WFCO interview, she went on to reference the pointed racist attacks she endured as first lady, for example, being called an ape and multiple derogatory remarks made about her body.

Some personal attacks on Obama were even aimed to undermine her policy initiatives. While in the White House, she advocated  for physical and mental health, by shining light on childhood obesity, increasing access to healthy foods, and redesigning school lunch programs. Keith Ablow, a member of the Fox News “Medical A-Team,” once remarked that the former first lady “needs to drop a few” pounds before she can be taken seriously on the issue of nutrition.

According to The Denver Post, Obama encouraged women to own their scars in order to truly heal and not let those who hurt them off the hook.

“Women, we endure those cuts in so many ways that we don’t even notice we’re cut,” she said. “We are living with small tiny cuts, and we are bleeding every single day. And we’re still getting up.”

While Global Citizen reports on the increasing number of women standing up and running for office worldwide, unfortunately, women are still drastically underrepresented in the United States government. In the House of Representatives, women hold just 83 (19.1%) of the 435 seats, and in the Senate, women hold just 21 (21%) of the 100 seats.

Both Michelle and Barack Obama have embarked on speaking tours after their post-presidency vacation, and during the WFCO event, she stressed that she does not plan to run for political office.