Getting Nepal back on track for universal sanitation coverage by 2017!

Yes – we are talking about toilets!  World Toilet Day was started on 19 November 2001 in order to raise awareness and educate everyone about the 2.4 billion people who do not have access to safe sanitation, 1 billion of whom have no choice but to defecate in the open.  In a world of 7.3 billion people, this translates to roughly 1 in 3 people living without proper toilets and latrines, which impacts their health, dignity, security, nutrition, and economic productivity.

This is such an urgent priority that the United Nations General Assembly recognizes toilets and sanitation as a human right.  The UN's new set of Global Goals that were unveiled this September aim to eradicate the global sanitation problem by ensuring that water and sanitation are available for everyone, everywhere by 2030. But this can only be achieved by increasing awareness around the world.

The 19th of November will also mark almost seven months since a 7.8 magnitude earthquake devastated Nepal, followed by yet another earthquake and then aftershocks over the next several weeks.  This catastrophic event killed almost 9,000 people, and injured approximately 22,000.  More than 800,000 houses were completely destroyed and a further 290,000 damaged, leaving hundreds of thousands of families without shelter and critical sanitation infrastructure.

Before the earthquake, Nepal was making great strides in building toilets and encouraging people to stop defecating in the open. In fact, the Nepal government has been so committed to making their country open defecation free (ODF) that the Prime Minister pledged to deliver universal access to safe drinking water, basic toilets and hygiene by 2017. He also made four other specific commitments: to reform the water and sanitation sector, to accelerate efforts to end open defecation, to improve financing, and to focus on keeping programs and facilities functional and sustainable. More importantly, rather than just distributing materials and making services available, the government has been focused on changing behavior and habits – encouraging communities to understand and embrace the importance of safe and healthy hygiene and sanitation habits.  That’s a remarkable effort and movement for one of the poorest countries in the world. 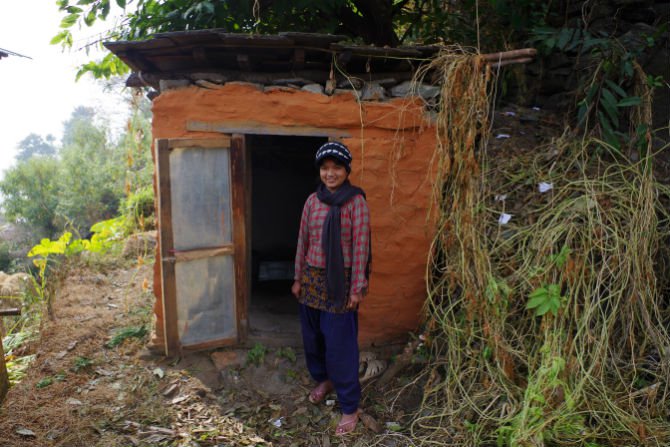 Unfortunately, this tragedy significantly hindered Nepal’s citizens’ access to safe, clean water and suitable sanitation facilities. Approximately 4 million toilets were partially or completely destroyed by the earthquake in Kathmandu and neighboring districts, and over 5,000 water supply systems sustained damage.  While the government, in collaboration with international aid organizations, carried out a Post Disaster Needs Assessment and has been working on short to long-term recovery plans, there is much work to be done.  Some ongoing activities include temporary or provisional repairs to water systems, rebuilding of toilets and hand-washing facilities, and resumption of the ending open defecation campaign. But, the country still needs more resources to continue its rehabilitation.

So what can global citizens do to aid this effort?  Well, World Toilet Day is a day for ACTION!  We are all part of a wider system, made up of individuals and organizations that can make a difference and can be at the heart of the response.  It is vital that Nepalese have access to hand washing and sanitation facilities for their health, stability, and dignity.  This means not only focusing on earthquake-impacted regions, but also supporting the organizations that work on the ground to eliminate the gaps in access to proper sanitation services and water supplies among the most marginalized groups.

One group in particular that runs a WASH program in Nepal, and also allocated funds to the restoration efforts in districts affected by the massive earthquake is the Global Sanitation Fund (GSF).  The GSF is the only global fund solely dedicated to sanitation & hygiene and has direct and lasting impact on the lives of millions of people. In Nepal, and in over a dozen other countries in South Asia and sub-Saharan Africa, the GSF funds and supports community-led sanitation programs for the most vulnerable people, through a diverse network of stakeholders that include households, local governments, community-based organizations, NGOs, academic institutions and local entrepreneurs.

The GSF-supported program in Nepal aims to help the government achieve the national goal of universal sanitation coverage by 2017, with a focus on achieving ODF status and promoting good hygiene practices. With the program currently supporting 17 districts, key goals include enabling more than three million people to live in ODF environments and access improved toilets and improved hygiene behaviors.

Every person, everywhere, has a right to quality sanitation.  This World Toilet Day, it is important not only to recognize the needs of those with inadequate access to sanitation, but to contribute to tangible, effective, and measurable ways of achieving these goals. Together, global citizens can transform the lives of millions of people worldwide.

This article was contributed by Guna Raj, the Executive Director of the Community Development Forum, a NGO in Kathmandu that handles environmental & ecological sustainable sanitation. He is also the National Coordinator for the United Nations’ Water Supply & Sanitation Collaborative Council (WSSCC.)

You can also go to TAKE ACTION NOW and send a tweet for World Toilet Day thanking Sweden for their commitment to sanitation.