Did you spot Elmo heckling Theresa May? 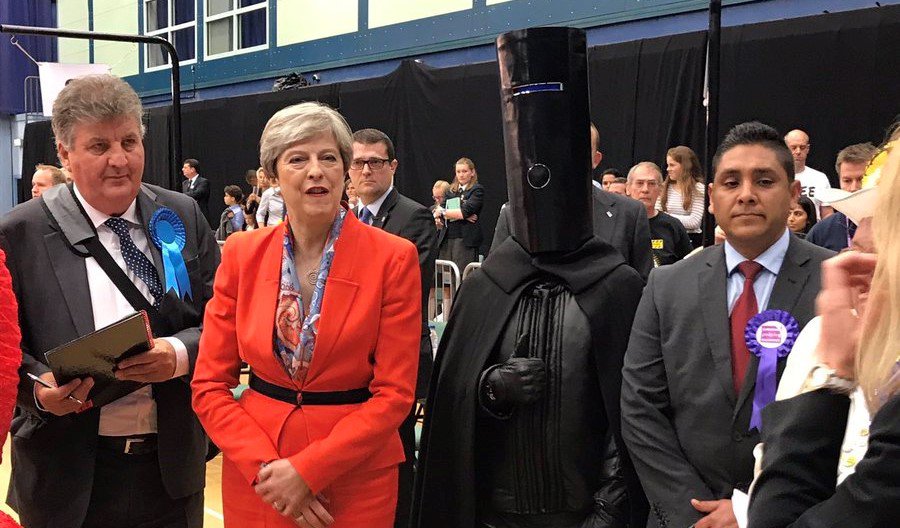 It was a long night of anticipation for all sides of the political spectrum, but in great British style, some hilariously odd moments have given us a chuckle along the way.

1) Elmo heckling Theresa May on arrival at Maidenhead constituency

Elmo heckling Theresa May is the best thing I've seen all week. #GE2017pic.twitter.com/FTiEDwLklI

It all began with the strange moment Elmo heckled May as she arrived at the Maidenhead Declaration. Even more bizarrely, it turns out Elmo was standing against May - and actually secured three votes!

Win or lose, if we are to take one thing from this election it is to never fully commit to a spontaneous high 5. #Corbynpic.twitter.com/OiZGrJVJ6r

Excitement and sleep deprivation must have kicked in when Corbyn committed himself to possibly the worst high five in election history. We are cringing for Emily Thornberry, MP for Islington South and Finsbury, who was slapped on the chest by mistake.

3) Lord Buckethead does the dab

Morning! No, you didn't dream it. I stood on a stage with the Prime Minister of the United Kingdom. (And I did a dab). #anewdawnhasbrokenpic.twitter.com/Qj4Gk2Fqzi

Yes, that actually happened. Lord Buckethead stood as an independent candidate and managed to accumulate 249 votes in May’s constituency of Maidenhead. The self-titled “intergalactic space lord”  then went onto dab on stage in delight!

4) Mr Fish Finger rocked up in Westmorland and Lonsdale

It's quite clear who really won this election. 👏Mr Fishfinger. pic.twitter.com/DfuzK4H3rl

Anyone got a fly swatter? David Dimbleby needs one in the studio! https://t.co/YMVJP13SGk#BBCelection#GE2017pic.twitter.com/tLv6RDcuoy

Won’t someone help this guy out? He’s got work to do.

On cue, the BBC camera sweeps majestically up to John Curtice, perched on the balcony like a medieval warlord, surveying the chaos below. pic.twitter.com/wi3xXJuBch

John Curtice has been described as, “Britain’s most respected opinion pollster,”  and last night he defended that title through and through. Curtice became a beacon of certainty as his exit polls matched up with the results of the Conservatives being the largest party but unable to make a majority government. The people love him!

“I’m sure she’d love to go running through fields of wheat again. But she can’t.”

It seems Andrew Neil had breakfast on his mind when he served up some strong words to  Nigel Farage at Westminster this morning. “Out... over… done... toast.”

9) Larry the cat made an appearance

BREAKING NEWS: Larry the cat is currently standing outside of number 10 Downing Street prepared to make a statement ... CAPTION THIS #GE2017pic.twitter.com/lciocZkSHM

With the confusion of this morning’s hung parliament outcome Twitter looked to Downing Street for answers. Loyal as ever, Larry the cat was on call and prepared to make a statement.