BREAKING NEWS: A Majority of Australians Have Voted in Favour of Marriage Equality 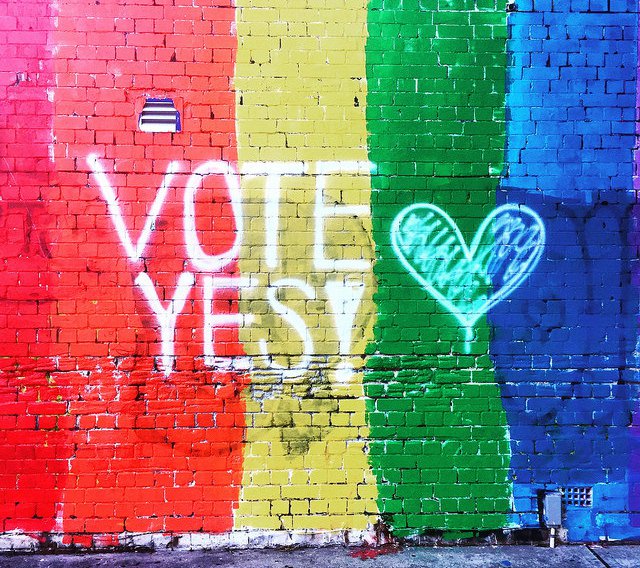 Scenes of celebration have erupted around the country as the Australian marriage equality vote results in a YES.

At 10 a.m. 15 November the results from Australia’s same sex marriage survey were announced, showing 61.6% of Australians have supported the right of same sex couples to marry.

This all happened because of you.

We did this together. pic.twitter.com/4vWuIj9bpB

The Australian Bureau of Statistics (ABS) announced the results of the voluntary, non-binding postal vote, stating that the overall response rate to the survey was 79.5%.

Australian statistician David Kalisch said, "This is outstanding for a voluntary survey and well above other voluntary surveys conducted around the world. It shows how important this issue is to many Australians."

The participation rate was slightly higher for older age groups. The youngest Australians eligible to vote, 18-19 year olds, had a 78% participation rate. The electorate with the highest yes majority was the seat of Melbourne in Victoria with 83.7% of people voting yes, with similar results in Sydney.

Liberal Senator Dean Smith will be introducing a bill to amend the Marriage Act in the Senate on the same afternoon that the results were announced. The bill includes an exemption for religious organisations in officiating same sex marriages. The motion has cross-party coalition support including senators from Labor, the Greens, and the Crossbench. A debate and parliamentary process is planned to begin on Thursday morning.

Liberal Senator James Paterson will also be proposing a new conservative-backed bill designed to provide for religious protections. The bill extends as far as allowing private businesses to refuse goods and services for gay weddings if they have "conscientious objections."

However Turnbull has stated that it would have "virtually no prospect of getting through the Parliament" and has made it clear that Smith's bill is his preferred option.

The people of Australia have spoken and I intend to make their wish the law of the land by Christmas. This is an overwhelming call for marriage equality. pic.twitter.com/PWZbH5H71r

“And now it is up for us here in Parliament to get on with it,” he said as promised to deliver change to legislation by Christmas this year.

#BREAKING PM Turnbull: "Now it is up to us here in the parliament of Australia to get on with it, to get on with the job the Australian people have tasked asked to do and get this done. This year, before Christmas - that must be our commitment." #MarriageEquality

Co-chair of Australian Marriage Equality Alex Greenwich thanked politicians for coming together on this issue.

"For the first time we have a clear pathway to marriage equality, and this is thanks to powerful political consensus in support of the LGBTI community and a fair go for all."

Opposition Bill Shorten has said, "Yes, yes, yes! What a fabulous day to be an Australian. Today we celebrate. Tomorrow we legislate."

It has been months of campaigning from both sides of the marriage equality debate. Many were nervous in the lead up to the results that the opinion polls, predicting a yes vote, may have got it wrong.

Many pro-marriage equality events have been planned around the country. These events were set to go ahead regardless of the vote. For many people today is an important day in Australia’s history.

Australia’s vote on same sex marriage comes on the heels of its legalisation in Malta and Germany.

However, gay marriage remains criminalised in many countries around the world, sometimes carrying penalties as harsh as the death sentence.

At Global Citizen we believe the world needs active global citizens who are engaged in the world, knowledgeable about its diversity and passionate about change.

Global Citizen campaigns on the United Nations’ Global Goals for Sustainable Development, and reducing inequality is goal number 10. You can take action on Global Citizen for a range of actions that work to reduce inequality and call on other governments to end discrimination and violence against the LGBQTI community.