A young man from Malawi is reinventing the wheel

This unique wheel system expands and contracts depending on the difficulty of the terrain. 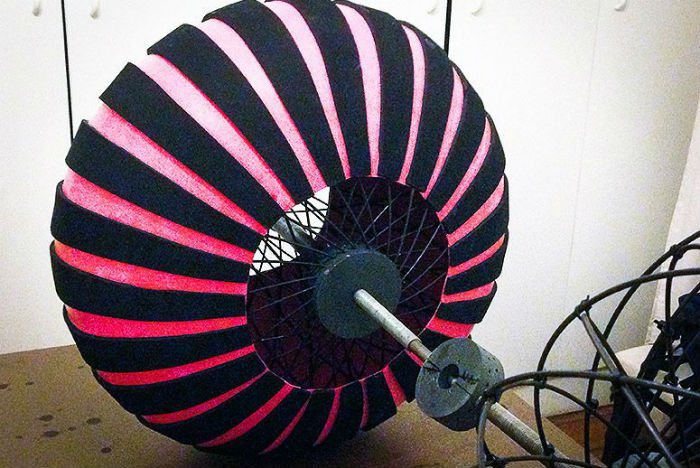 Growing up in a rural village in Malawi, Ackeem Ngwenya and his cousins would collectively carry 40 pounds of corn to a milling station to be processed into flour.

The journey doesn’t sound too bad for a kid with a bike on a smooth sidewalk or road: three miles there, three miles back. But this was six miles of walking across uneven terrain, alternatively rocky, sandy, and muddy, with a heavy load. Such poor road conditions are typical throughout Malawi. Floods earlier this year displaced nearly a quarter of a million people, leaving many without access to basic services.

Like many other households, his family also grew crops such as cassava, a staple food that can readily be sold at the market. The main challenge is getting it from a rural village to a central trading place where buyers will pay a fair price.

Politicians and builders favor high-profile solutions like roads. But Malawi is a poor country with limited money for infrastructure investment; funds often get diverted, and without proper maintenance, roads quickly fall into disrepair.

“Building roads does not guarantee that there will be transport services,” says 26-year-old Ngwenya. “People don’t really want roads as such; they want the services roads bring.”

Ngwenya moved to Johannesburg when he was 10 years old and subsequently lived in other cities, including London, Berlin, and his present home in Cape Town, South Africa. The ease of transportation contrasted sharply with his memories of childhood.

While studying for his master’s degree in innovation design engineering at the Royal College of Art in London—he crowdfunded for tuition and fees—he developed the concept behind Roadless, a unique wheel system that requires neither a proper road nor the kind of power an SUV uses to push through untamed bush.

Instead, Roadless expands and contracts depending on the difficulty of the terrain. Over a relatively smooth surface, the wheel system is tall and thin and moves quickly. But when faced with sand or mud, the user cranks the arm so that the telescoping hub changes the height and width of the wheel, and out spins a shorter, fatter wheel with far more contact area. Placed on the axle of a bicycle, cart, or truck, the wheel can ride across almost anything. 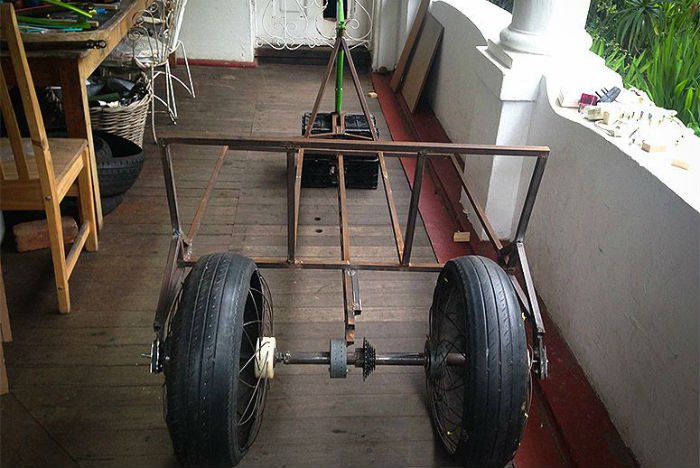 In its current form, the central steel shaft and interior wires are covered with hand-cut rubber—used tires are a seemingly endless source—but theoretically, a range of materials could be used. Local production, distribution, and maintenance in various developing countries could mean different materials depending on what’s readily available.

Roadless’ geometric aesthetics, with their hypnotic, built-in repetitions, hint at Ngwenya’s earlier training as a jewelry designer, and at his ability to bring together seemingly disparate elements.

“It wasn’t an idea that came to me out of the blue. It was an iterative process,” he says. For example, traditional Malawian basket weaving with bamboo strips turned out not to be strong enough for the cover but might have further applications down the road. Initially, he imagined a supersize wheel with a storage compartment, but going up and down hills proved too difficult.

The prototype needs more testing before it can go on the market. If it works well on a golf cart, villages might be able to pitch in for a small bicycle or vehicle to place the wheels on. 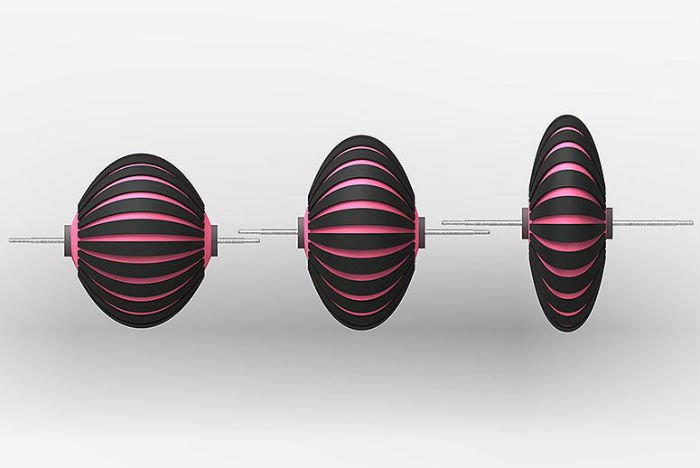 It’s not unusual to have to walk a mile from a village to the nearest transport hub to catch a ride to a central market to sell food or crafts. Maximizing the amount of goods that can be easily brought along, and minimizing the effort needed to do so, could mean more money for the same day's work.

This article was written by Rebecca L. Weber in support of TakePart.