9 movies for a guilt-free Netflix binge

For the rest of us who adore a good vegging sesh, I’ve created the Netflix list below. 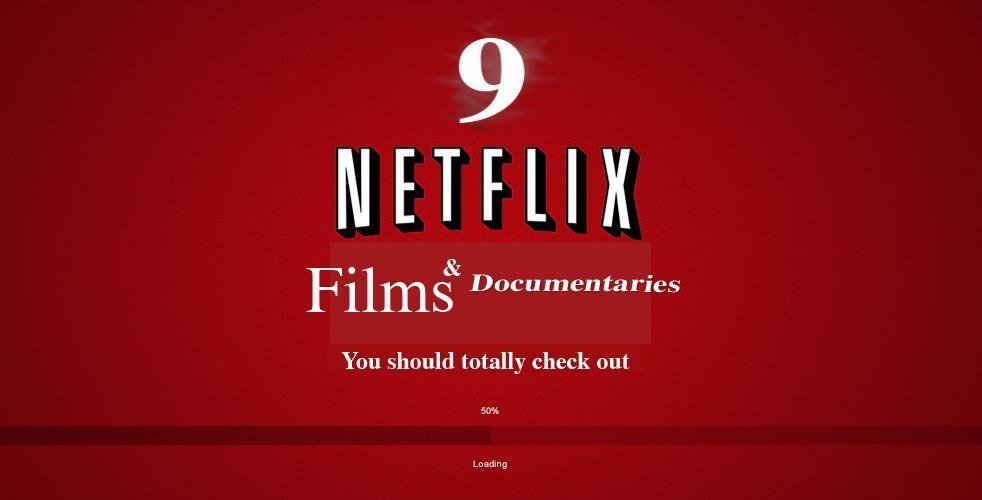 Happy Friday! It’s the start of the weekend that’s long been awaited for. I have a love/hate relationship with winter and it seems that it's finally coming to an end. It's getting nice out here in the Northeast of America, which means most of my neighbors will probably want to spend their time outside and not inside watching TV. Guess I can’t blame them? For the rest of us who adore a good vegging sesh, I’ve created the Netflix list below. It’s a compilation from myself, my colleagues and friends of films we consider “guilt-free”. I’m really excited because I haven’t seen all of them, so I’ll be using this list as well. Let this list inspire and galvanize you to advocate!

1. Living on One Dollar

I, personally, highly recommend this documentary. It follows the experiences of four young friends who jet off to rural Guatemala to live on less than $1 a day for two whole months. Now, if you’re familiar with our Live Below the Line campaign and you’ve participated in the 5 day challenge, imagine how much harder it is to do it for two months. Actually, imagine how much harder it is when it is your daily life. So what these four young men do is pretty dang cool; they live in the same conditions as the people in their new village and essentially prove that it is next to impossible to live on a dollar a day, and even more so with a family. With backgrounds ranging from economics, international development, and film they make a great team to portray and learn about the hardships people in extreme poverty face.

The title is a great play on words, as the documentary explores how mainstream media often portrays women in positions of leadership in disparaging ways. International Women’s Day was just last weekend (but really, every day should be women’s day)!

Samsara is the Sanskrit word for “the ever turning wheel of life”. This film was shot over five years in 25 countries going through disaster zones, industrial sites, sacred grounds, and natural wonders. A great documentary that portrays our world as beautiful. What makes this documentary a must watch is that it’s all sensory, there is no dialogue, it’s the natural sounds of the world with music. I can’t wait to watch this one.

Self explanatory in the title, this documentary explores happiness in 14 different countries through interviews with people from all walks of life. From the swamps of Louisiana to the slums of Calcutta, happiness is a universal emotion that everyone can connect through.

(This was the only English trailer I could find, and for some reason it’s in black and white, the film isn’t– it was made in 2004..)

A French film about a successful orchestra conductor who returns to France following his mother’s death. Upon his return he reminisces with an old school friend. It shows scenes from their old school days at a boarding school for “difficult” boys (they come from difficult home lives). It was when a new music teacher taught at their school that the students’ lives changed for the better. As this platform talks about a lot, education is a huge factor in individual success. And these two friends prove music education was everything in their lives. Watch for some wonderfully great singing!

A documentary that explores the challenges of converting to a vegan diet; it follows three carnivorous New Yorkers who agree to attempt to adopt a vegan diet for six weeks. This documentary explores the health, ethical, and environmental benefits of a vegan diet. And even if you’re opposed to a vegan or vegetarian diet, it addresses the concerns of carnivores as well. I’m a vegan myself, so I apologize for putting this up. I just love this documentary because while I knew the reality of slaughterhouses, what really surprised me was the dairy industry, something we don’t realize there are actual dangers in.

An interesting fact about this documentary is that model and activist Christy Turlington Burns went to Planned Parenthood with the idea of portraying the hardships that pregnant women all around the world face. The film aims to raise awareness on maternal and child health issues around the world. It shines much needed light on the problems faced by too many women in developing nations.

(I couldn't find a good trailer on YouTube... so enjoy a picture of a gyro I had in Greece, from back when I used to eat meat. YUM.)

This is a short series where each episode shows the street food of a different city in the world. You can check out the street foods of Istanbul, Bangkok, Mexico City and more. I haven’t seen this yet, but I’m all about worldly authentic foods. A very interesting culinary tour of the world, I’m getting hungry now.

A beautiful Spanish film that takes place during the Spanish civil war. A boy in rural northern Spain bonds with a teacher with leftist ideals who teaches the boy a love for nature.

If these suggestions don’t fill up your Netflix cue, try my colleague’s previous list of good views, most of them are still streaming! Watching Netflix is a great way to relax, but make sure you use the time to learn. Each of the issues profiled above have serious implications for our world. Watch the movies, and join Global Citizen to keep up to date with the most effective ways to take action to solve the problems highlighted in these films.