A Father, a Teenager, a Vaccinator: 3 People From 3 Countries on the Frontline of the Fight Against Polio

Afghanistan, Pakistan, and Nigeria are working to end polio for good.

Why Global Citizens Should Care
While polio still exists anywhere, children are at risk everywhere. That's why the global effort to put an end to polio once and for all is so important. Vaccinations are vital in this effort, and UK aid has been instrumental in pushing forward to make sure that every child is immunised against polio. UK aid is immunising up to 45 million children against the disease every year until 2020 — that's 80 children every minute. Join us by raising your voice in support of UK aid here.

Around the world, polio is 99.9% eradicated. It’s an incredible achievement for the international community — and it’s all happened in recent decades.

Now, there are just three countries that have never interrupted polio transmission: Afghanistan, Pakistan, and Nigeria.

Take Action: Tweet Now to Remind the Daily Mail That UK Aid Saves a Life Every 2 Minutes and Should Be Protected

As the world marks World Polio Day — celebrating how far we’ve come and gearing ourselves up for one last push in getting rid of polio entirely — we’re shining a spotlight on three people on the frontlines of the fight against polio in these three countries.

“Please wait, I’ll soon be with you,” says Nasiru, the father of six children, as he disappears into his house in Gagi Makurdi settlement in Nigeria’s northwestern state of Sokoto.

Within minutes, Nasiru reappears, proudly displaying immunisation cards with the record of the vaccines given to his youngest three children. 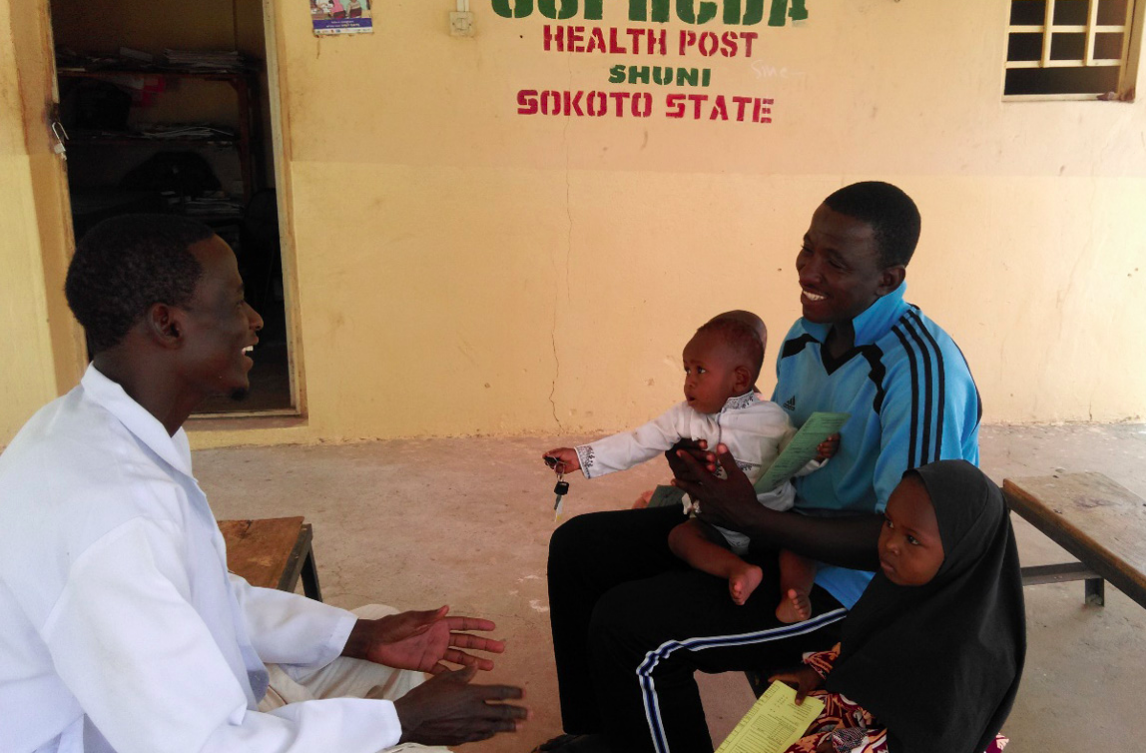 Nasiru has taken responsibility for ensuring that all his children receive their polio and other routine vaccinations.
Image: UNICEF/Nigeria

It is unusual for fathers in this conservative part of Nigeria to readily know the whereabouts of these documents. Tending to children and ensuring that they stay healthy is usually a mother’s job.

“Take a look at the cards. My children Fidausi and Fatima have completed all their required immunisation, whilst my youngest, Nana Asmaiu, is well on course to complete his,” he says.

Nasiru is a champion for immunisation, but he wasn’t always so enthusiastic.

It was Hauwa Ibrahim, a 46-year-old UNICEF-trained Volunteer Community Mobiliser (VCM), who persuaded Nasiru that the vaccine was safe and effective.

She is one of a 20,000-strong network of community mobilisers who work across 12 Nigerian states like Sokoto, where some communities have been reluctant to accept polio vaccination.

As recently as 2012, Nigeria accounted for half the world’s polio cases.

But today, with help from women like Hauwa, no wild poliovirus has been detected in the country since August 2016.

There are still many immunity gaps in Nigeria — as highlighted by an outbreak of vaccine-derived virus currently ongoing in the country — but in the villages where VCMs like Hauwa work, these gaps are beginning to close.

On her first visit, Hauwa was determined to convince Nasiru that vaccination against polio and other diseases is important, and that he should take the children to the health facility. 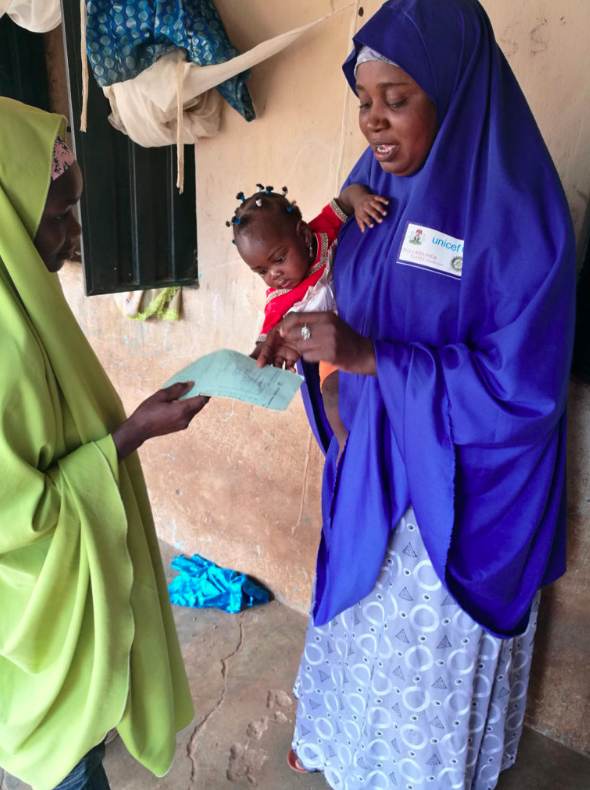 “My culture does not allow a wife to go outside of the compound, so when Hauwa insisted that we take our children to the health facility for vaccines, I had no way but to go myself. Else, Hauwa would not give up,” Nasiru explains.

While he travels with his children, Zara’u takes care of their older siblings at home.

By recruiting locally influential women like Hauwa from communities where some parents are vaccine-hesitant, and training them to be advocates for child health, vaccination rates are improved throughout their neighbourhoods.

In some areas, more than 99% of parents now accept the polio vaccine for their child.

“Hauwa resides in this settlement and I trust her; I trust that the advice she is giving is in the best interest of my children,” says Nasiru.

Southern Afghanistan is a region characterised by a rich and diverse but often complex history.

Enveloped by mountains, this part of the country has seen years of conflict which have left hospitals under-resourced and health services shattered.

Children face many challenges — as well as conflict and poverty, southern Afghanistan has the highest number of polio cases in the world. In this difficult environment, the virus can only be defeated if every child is vaccinated. 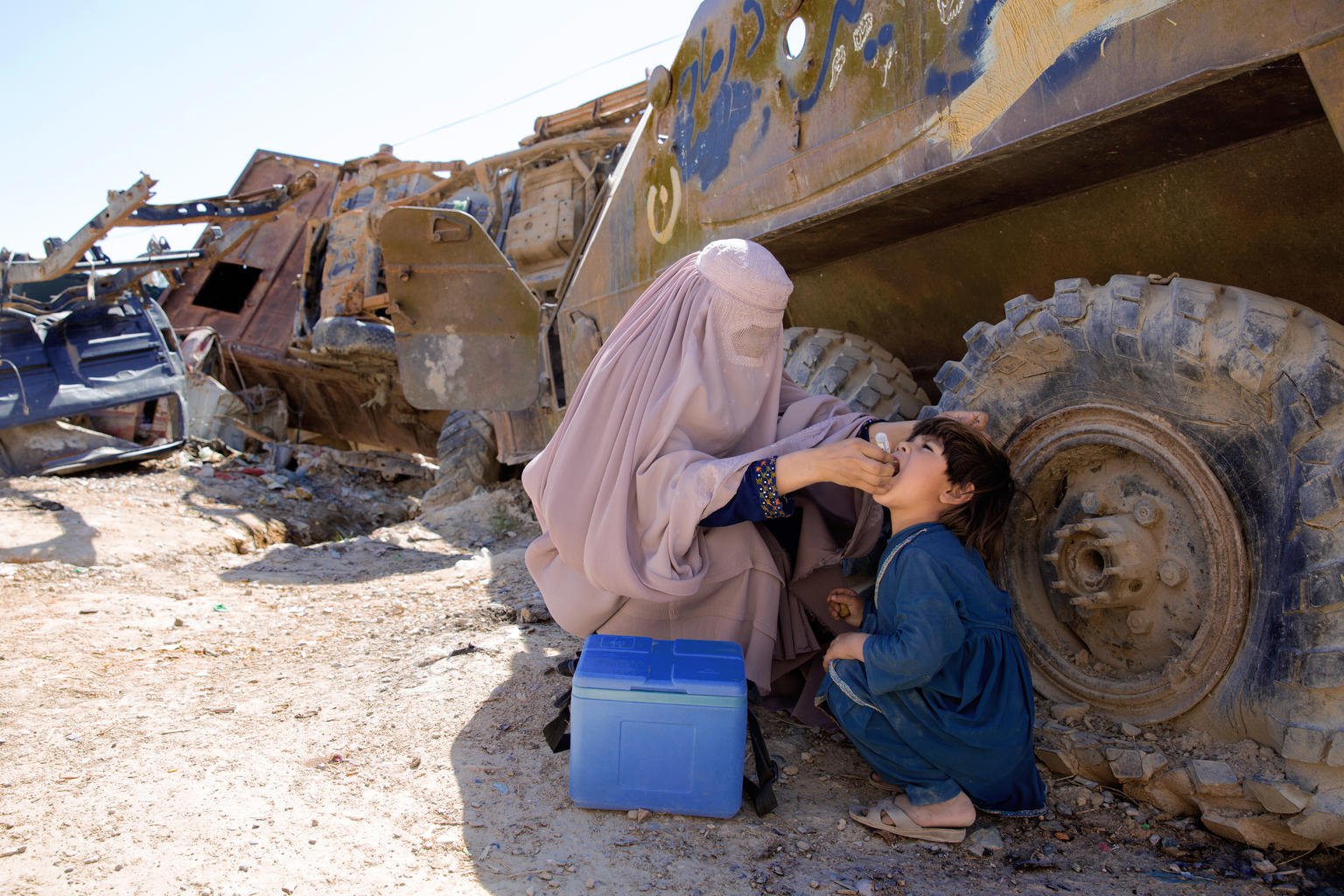 Last month, Afia and her colleagues vaccinated 9.9 million children and educated millions of parents about vaccination across the country.
Image: UNICEF

Afia*, who is 19 years old, is one of more than 70,000 committed polio workers in Afghanistan, supported by UNICEF and the World Health Organisation (WHO).

Last month, she and her colleagues vaccinated 9.9 million children and educated thousands of parents about vaccination across the country.

The polio eradication programme comprises one of the biggest female workforces in Afghanistan: a national team, all fighting polio.

Some women work as vaccinators, while others, like Afia, are mostly engaged in education and social mobilisation efforts.

The polio programme gives women culturally appropriate opportunities to work outside the house and engage in their community, speaking to parents about the safe, effective polio vaccine, and answering their questions.

Afia says that if she weren't eradicating polio, her parents would expect her to give up her education and get married.

Her younger sisters look up to her, excited to work in the polio eradication programme when they are old enough. Her job is very important to protect all children.

Culturally, male vaccinators are unable to enter households to administer vaccine, causing difficulties if young children are asleep or playing inside. 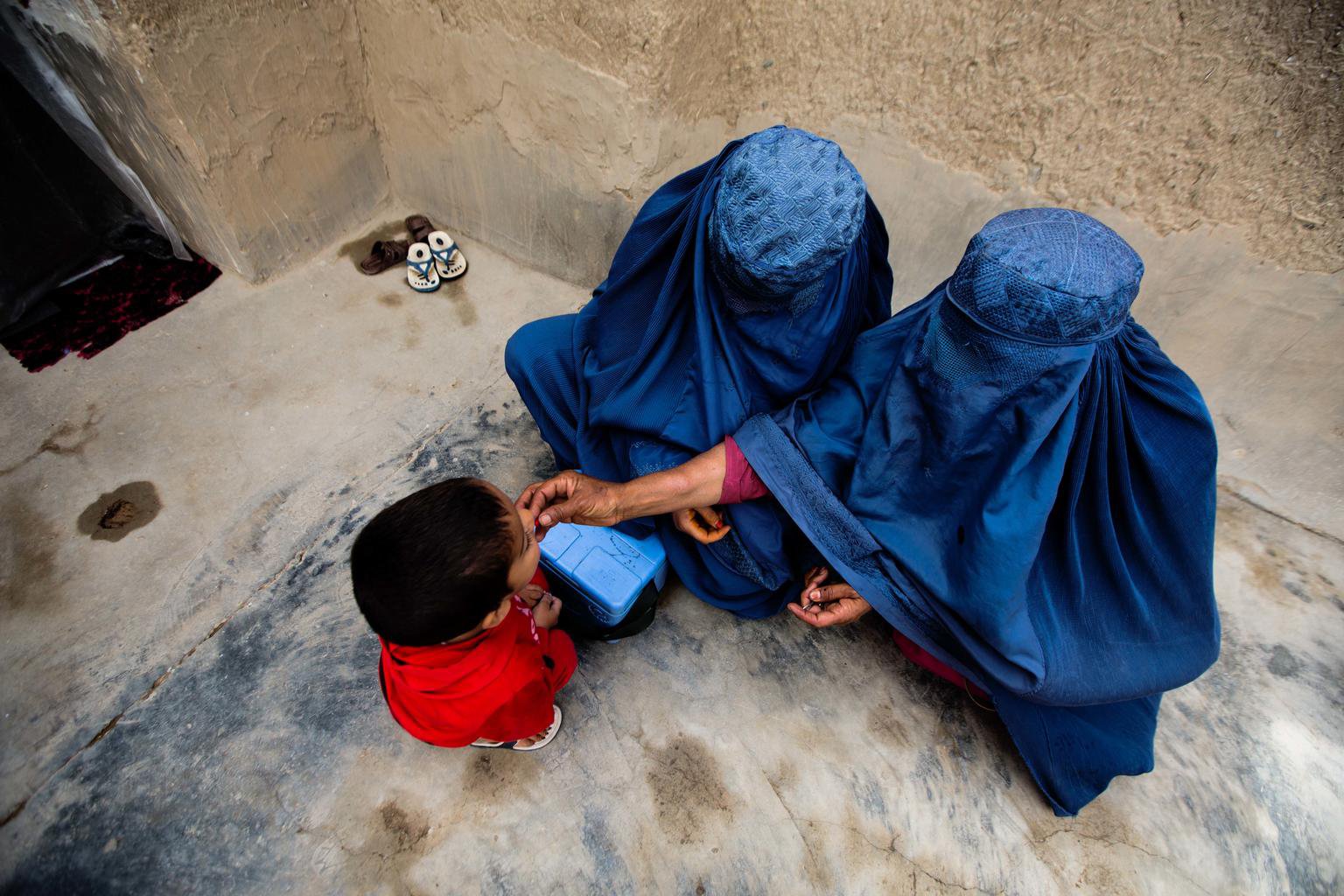 In southern Afghanistan, a child is vaccinated against polio by Afia's team of vaccinators.
Image: UNICEF/Aghanistan/Hibbert

Their freedom to enter homes and give the vaccine to every child is one reason female polio workers are so critical.

Afia started work at 7 a.m., and is now walking home 10 hours later with a young boy she has just vaccinated. Her purple burqa stands out against the sand as she goes home to tell her parents and siblings about her day.

Afia feels positive about the future of polio eradication in Afghanistan: “We have a duty to protect our children, and I won’t stop working until every child is protected.”

*Names have been changed to protect the identities of those involved.

“I feel our collective productivity has improved manifold, ever since we started working together with the Community Based Vaccinators from the polio eradication programme,” says Syed Mussayab Shah, a tone of pride in his voice.

Shah is a vaccinator with the Expanded Programme of Immunisation, posted at Gulbahar Civil Dispensary, Peshawar district, Khyber Pakhtunkhwa.

He is responsible for immunising children against nine vaccine-preventable childhood diseases. But reaching children with vaccines in dense urban environments — especially those living in slums and migrant families — can be a significant challenge. 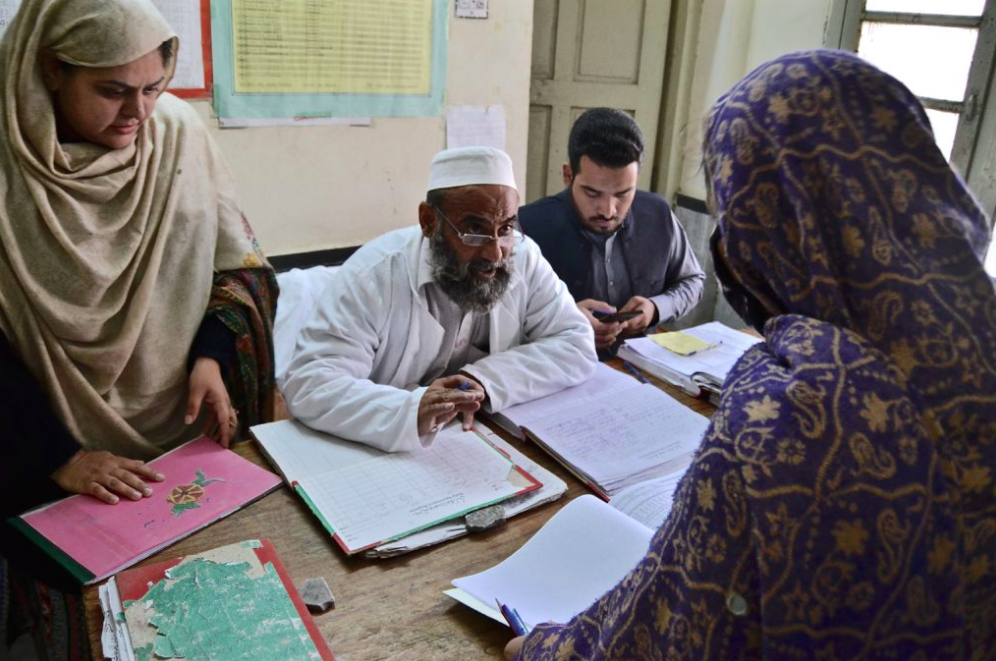 So the polio eradication programme and the team responsible for delivering routine vaccines — the Expanded Programme on Immunisation — are working together to make sure that they do the job as best they can, explains Shah.

“We are determined to reach and vaccinate every child in our area,” he says. “And to ensure this, we exchange information and notes with the community based vaccinators twice every week.”

Where families live in concrete housing units in urban slums, access to health care is a persistent challenge.

The urban slums are often unrecognised, lack essential infrastructure, and are low priority for local health authorities. This translates into low and unequal coverage of social services in urban areas — including vaccination.

Pakistan is the most urbanised country in South Asia and the population living in urban slums continues to increase. The urban population has risen from an estimated 43 million in 1998 to 73 million in 2014, with high levels of migration.

The Civil Dispensary is the only government health facility in the area that caters, not only to the residents of Gulbahar, but also those living in adjoining slums.

Community-based polio vaccinators from local areas come to this health facility to sit side by side with their colleagues from the broader vaccination programme to review their field books — containing the housing maps and vaccination details of every single child under 5 in their areas.

This collaboration is game changing for the drive to protect every last child against vaccine preventable disease.

UNICEF, with funding from Gavi, the Vaccine Alliance, is supporting the Government of Pakistan in improving routine immunisation coverage in urban slums with a focus on seven major cities in Pakistan in collaboration with the polio eradication programme.

“Earlier we worked without defined plans and targets,” says Shah. “Now, due to the information sharing from community based polio vaccinators, we have plans with identified areas and targets that help us monitor our own progress as well as the vaccination coverage.”

UNICEFhave partnered with easyJet, who over the last six years have raised over £10 million helping to vaccinate over 25 million children against polio.